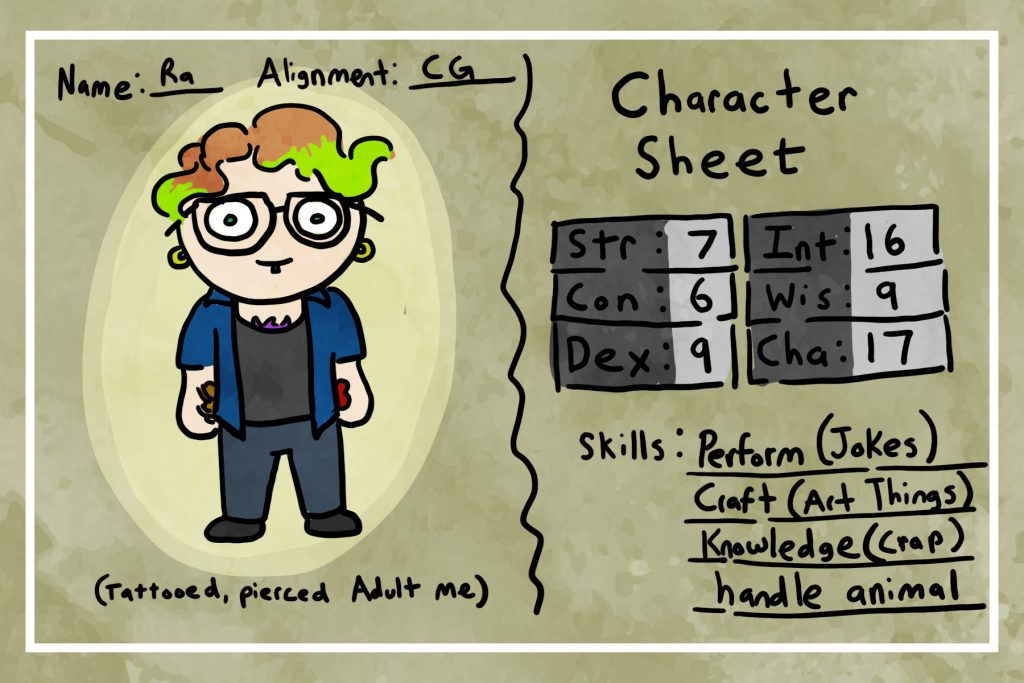 I wasn’t all that much of a nerd growing up. It wasn’t because I lacked the interest and natural proclivities of being one. Instead, it was because I grew up in the cultural wasteland of rural Oklahoma. This was the barren land of getting possessed if you so much as perused a copy of Harry Potter and the Sorcerer’s Stone, and Pokémon sent you to hell for nebulous reasons I still don’t have a firm grasp of.

Luckily for me, I started playing Pokémon before my parents were told it was a one way ticket to damnation stored in a Gameboy Color cartridge, and when they looked over the books and games I had, they were as baffled as I was about which content specifically was supposed to make me the star of the next Exorcist. 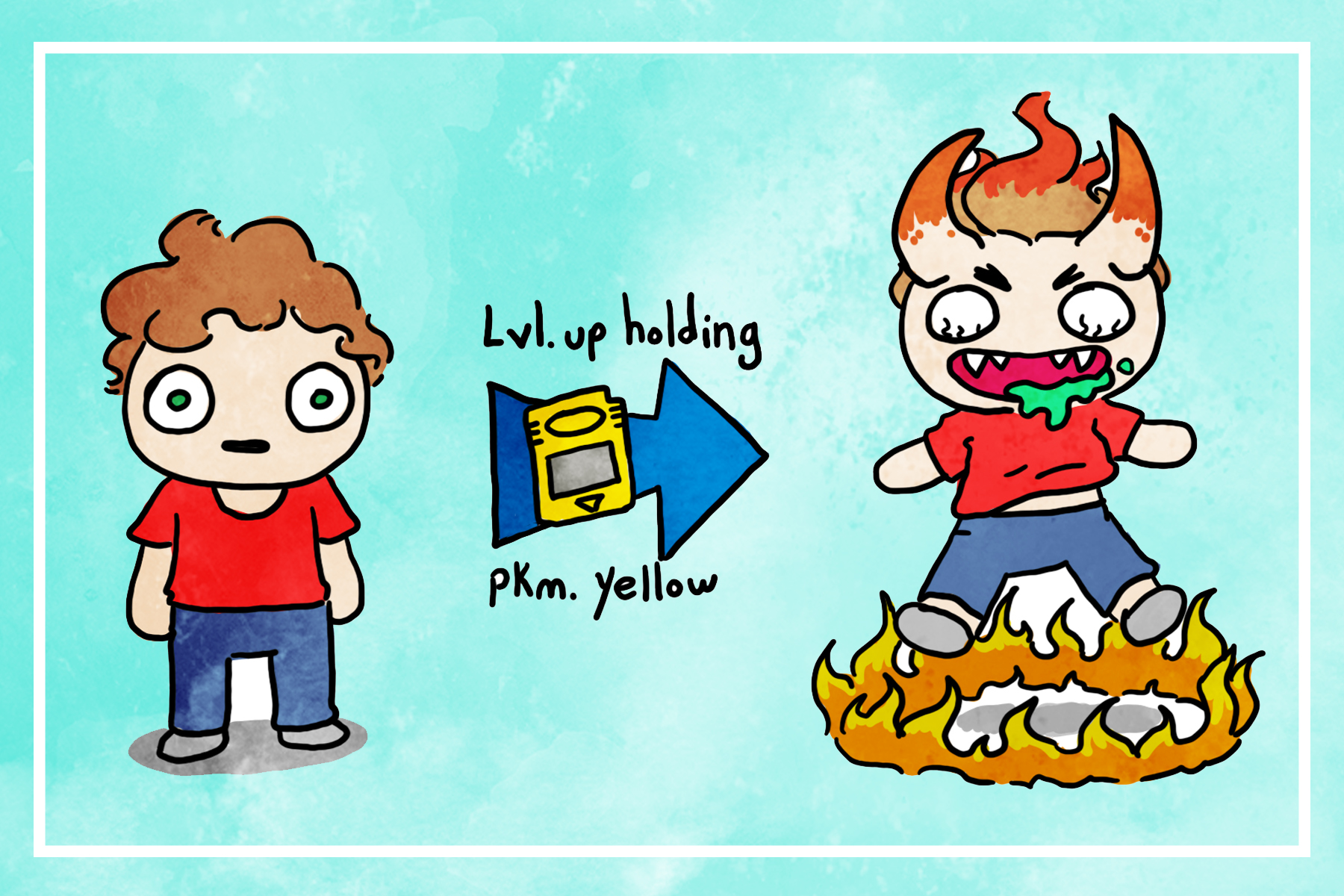 I was home schooled until 9th grade due to my sensory issues and borderline agoraphobia, but when I hit high school, the geeky side of heaven finally opened up to me.

I made some nerdy friends the first couple of years, our friendships held mostly together by my newfound obsession with every Legend of Zelda game I could get from the local Game X-Change. Three of us became wielders of the Triforce (I was Link, even though I strongly identify as Ganondorf, now.) and I was the maker of comics based around Super Smash Brothers Melee. 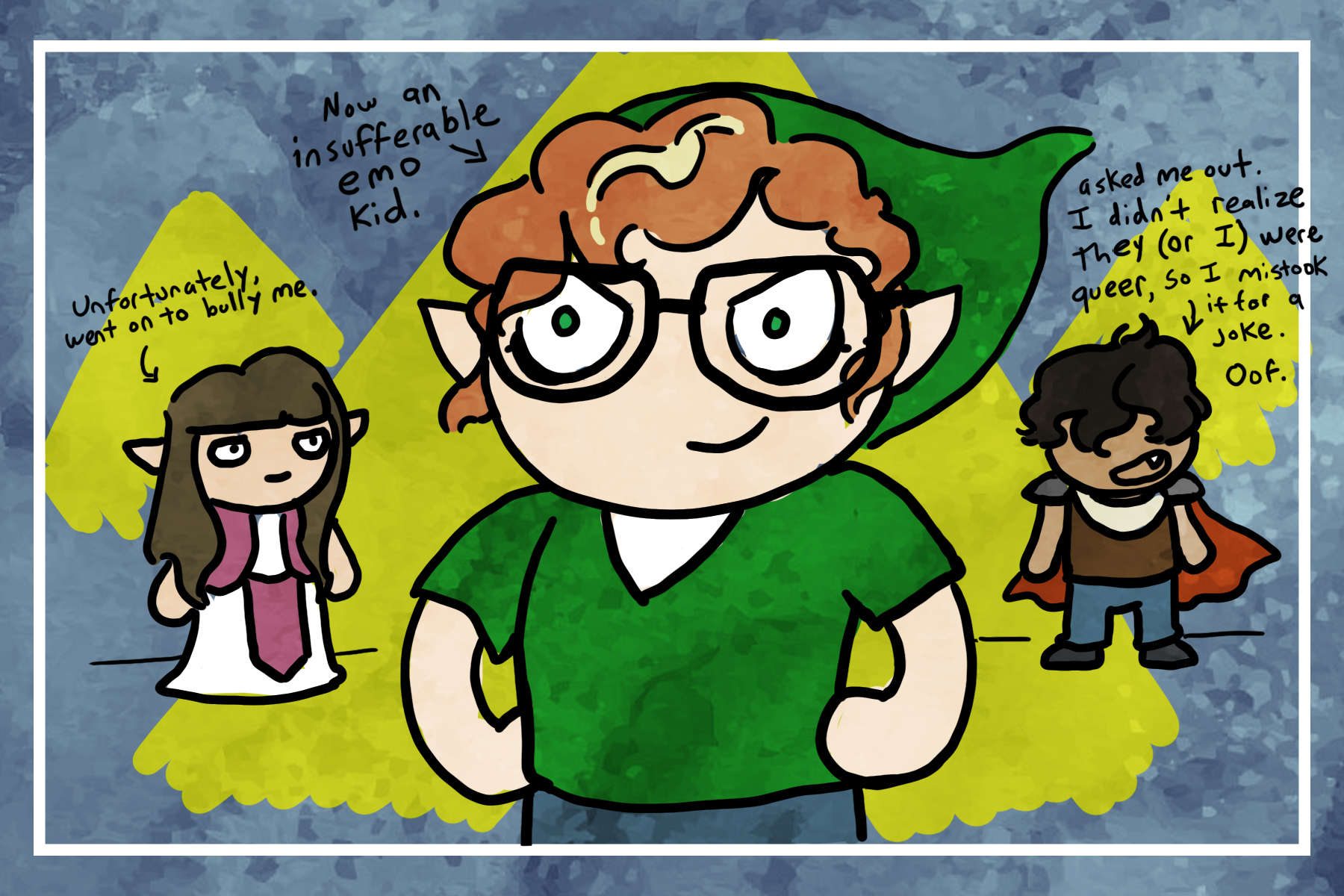 I was really starting to find myself as a budding geek, but it was when I was 16 that I had my epiphany. It was 2009, American Idol was in full swing, and smart phones were in their infancy. I decided to go to that same theater that had caused me many sensory meltdowns in my younger years to see the new Star Trek movie.

It was there, in that grimy, faded-red seat that I knew. I knew I was a nerd. I saw that movie in that theater at least three times, and considering it usually takes a force of nature to get me to a theater, it was quite an accomplishment. 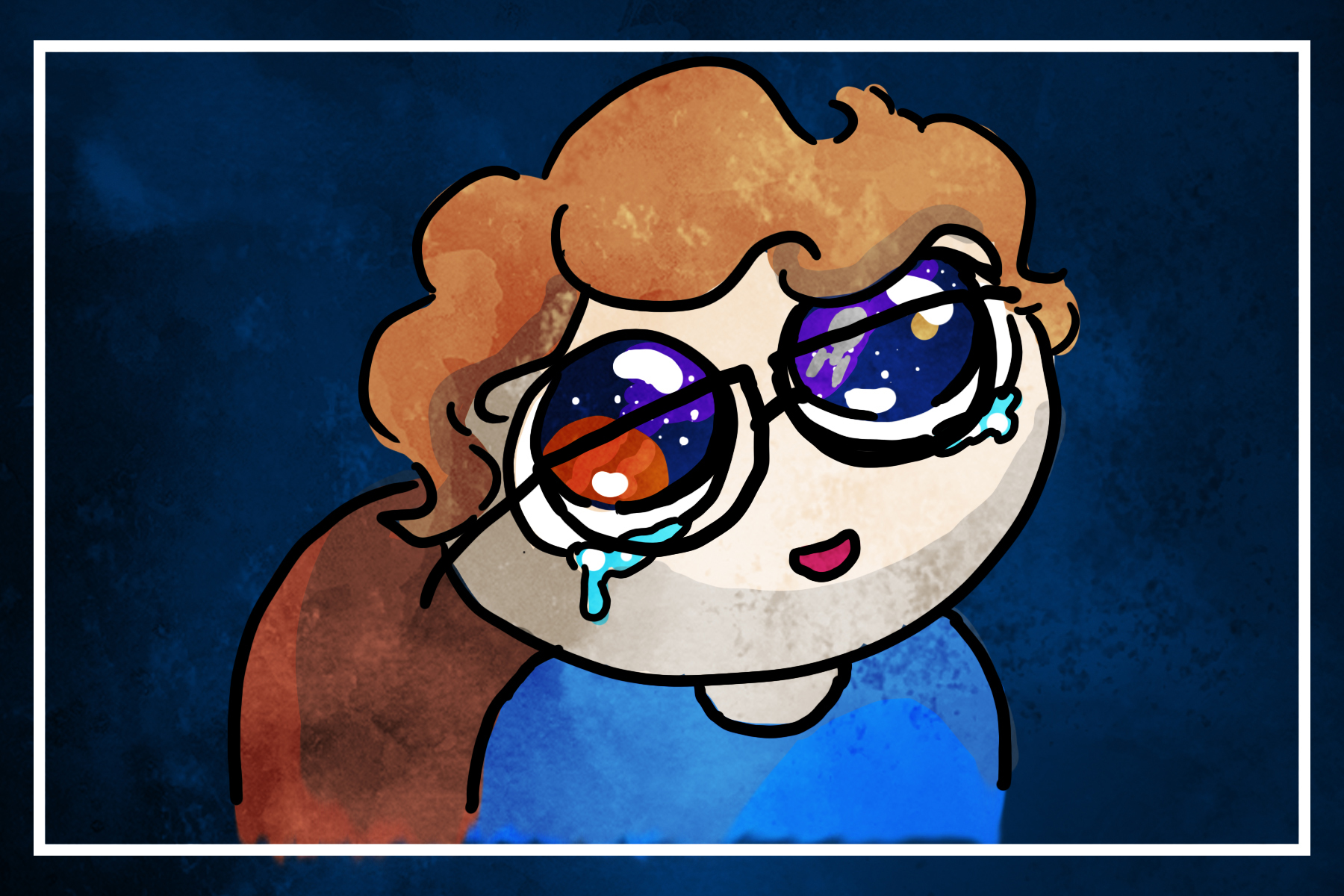 I became obsessed with Zachary Quinto as Spock, and the next few years saw me making cringe-worthy YouTube videos dedicated to the topic, bingeing the entire original series, writing fan-fiction, going to a Las Vegas convention to meet Leonard Nimoy (may he rest in peace,) making cosplays, and generally losing myself to this obsession.

With the door open to The Way of The Nerd, I found so much more that I was in love with. But I’m getting a little ahead of myself here.

See, high school, for all the great new things it brought me, was a very difficult time for me. Remember I said I lived in a cultural wasteland? You can imagine then, what the mental health care was like.

As a kid I had a lot of sensory issues, I learned and socialized differently, I was delayed with my motor skills– All the things that in the right time and place would have quickly gotten me diagnosed with ASD and (hopefully) gotten me some decent care.

Unfortunately, no one even really knew what autism was where I grew up. By the time I started seeking mental health care for crippling depression and anxiety at age 16, I had learned to cover most of the markers that would have gotten me a diagnosis, and I wasn’t properly diagnosed until age 25.

While I was home schooled, I knew I was the “problem child,” between myself and my sister, and I always assumed I was pretty dumb too. But when I got to high school, well, things got a whole lot worse. 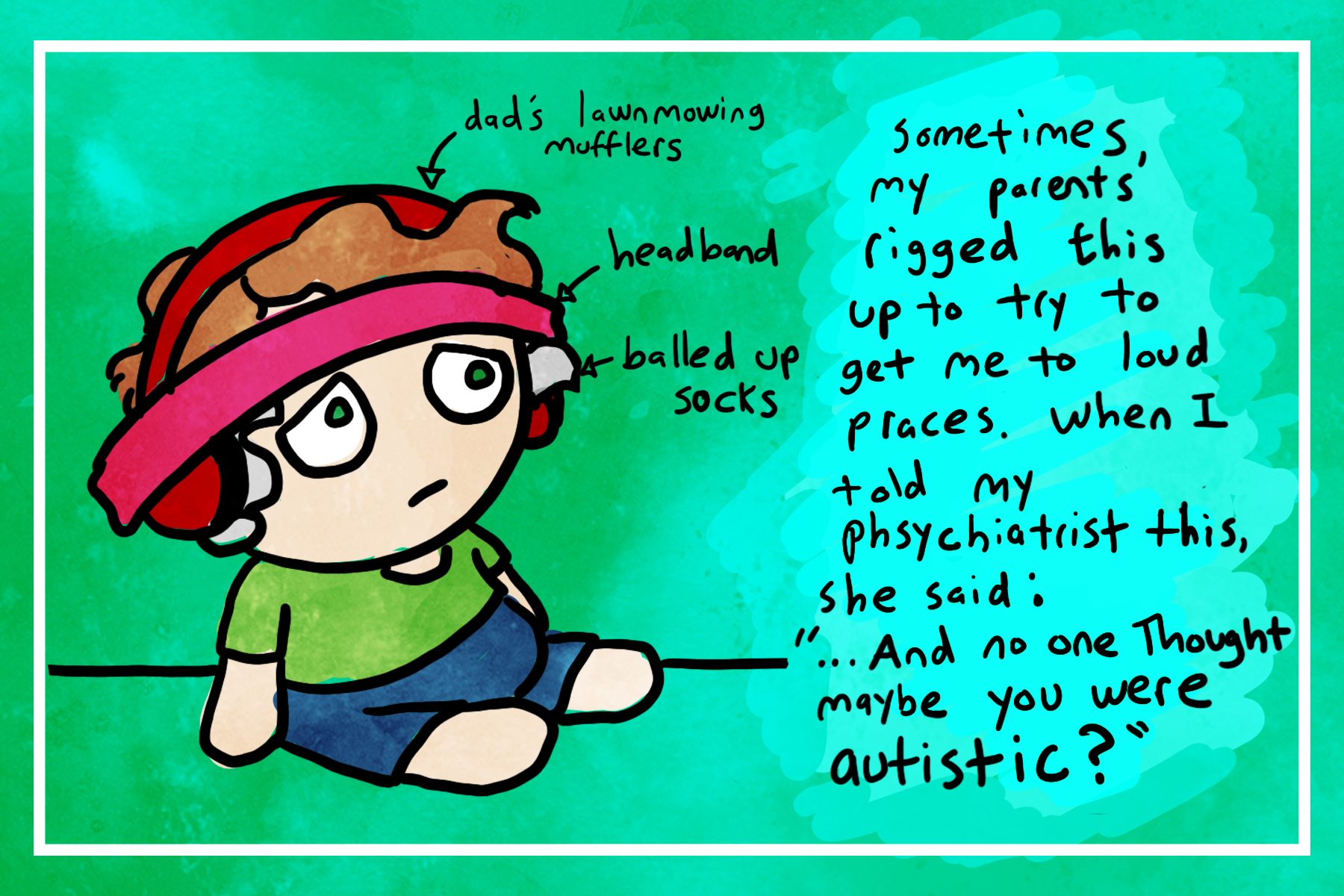 As soon as I showed up in high school, I was different. Initially, I was made fun of and bullied for my gender presentation (another story entirely,) but it kind of just devolved from there. I had no idea how to socialize, and the only positive reinforcement I could get was making a fool of myself to get laughs at my expense.

It got people to think of me as funny, but it all felt fake considering how alone and depressed I felt just below the surface. However, one of the biggest points of insecurity for me definitely came from my abysmal executive functioning. It’s something that I still struggle with a lot, and back then it made me feel like an absolute idiot.

I could intellectually do all my work so well that teachers wanted me in advanced classes, and I was a National Merit Scholars semi finalist. I got a 32 on my ACT on my first try. I was smart. I finally knew that.

Why then, was it that I came home crying every afternoon and needed my mom to tell me what homework to do in what order? Why had I needed her to sit by my side when she taught me math as a kid, covering every problem but the one I was working on until I finished the whole work sheet?

Why could everyone be in band, clubs, student government, have friends, AND do their homework, when doing just one thing overwhelmed me so much? I was bullied out of the robotics club because I was quickly labeled “lazy,” even though really, I was just too overwhelmed to show up much.

It was something I didn’t have language for until my adult life. It was also a feeling of inadequacy and brokenness I carried with me for years. In fact, it’s something I struggle with to this day. 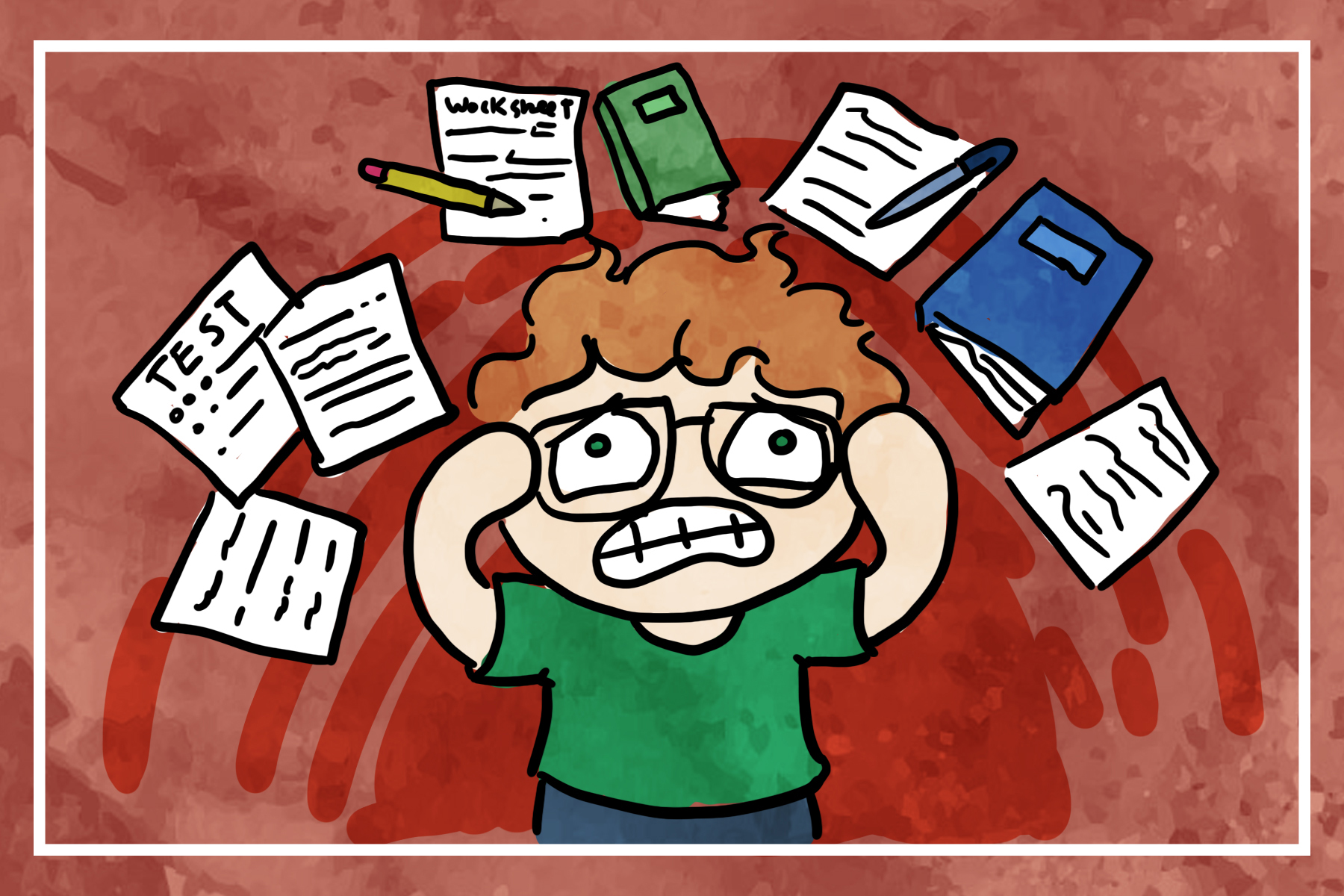 Fast forward again. I was in college when I met my now spouse, a fantastic person who has supported me through all the ups and downs. He’s also a huge nerd, and he was the one who got me started on another obsession of mine, Dungeons & Dragons.

It was the ultimate forbidden fruit where I was from, something people were totally sure that if you tried just once, well, you might as well just hand your soul to the devil on a polyhedral platter.

As it turned out, it was basically a hybrid between a board game and an improv group. While it was anticlimactically mundane, being the naturally creative and performative person that I am, I took to it like a fish takes to its first swim in a wonderfully geeky ocean.

For the uninitiated, Dungeons & Dragons is a role-playing game where you create a character from a list of “classes,” (i.e. warrior, wizard, rogue, ranger, etc.) and races such as an elves, dwarves, gnomes, and the like.

You select skills for your character, which different classes and races have advantages to learn, and once you’ve filled out a sheet with the numbers that quantify what your character can (and can’t) do, you get to pretend to be that character on an adventure with the characters the other players have created. It’s fantastic.

As a person who thinks in formulas and algorithms, it was easy to pick up, and unexpectedly, really helped me figure out a lot about myself. See, warriors are good at some things, like smashing things with an axe and using all kinds of weapons, and wizards are good at others, like casting spells and knowing a lot about things you may come across.

Every class has its own specialties and affinities, and a group needs a diverse set of characters to be able to tackle the challenges ahead. As I playfully filled out character sheets with what I imagined my own stats would be, it made me realize– “I’ve been playing the game of life all wrong.” 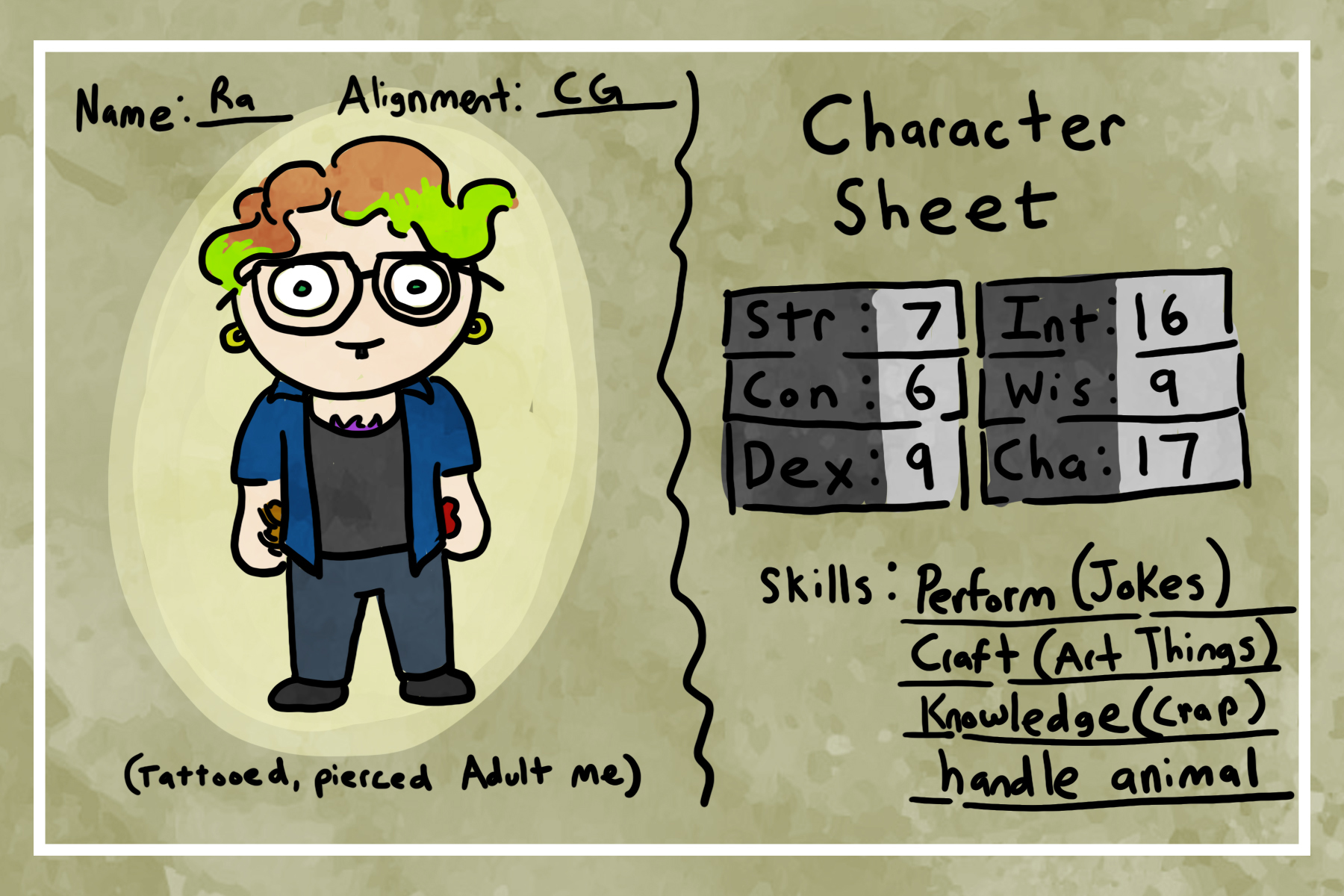 When I got into this world, everybody expected me to be a certain “class.” They wanted me to have a certain set of skills, certain abilities, and learn those things at the expected rate. But those weren’t the things I was good at! I had different skills, and while it has taken me years to remember that I need to eat lunch every day, I can pick up anything creative (despite what these intentionally bad illustrations may suggest) and build that skill really quickly.

I am quite charismatic and naturally funny, even though maybe I don’t always understand other people’s tones of voice or facial expressions. I’m passionate, I’m driven, I’m WORTHWHILE – I’m just not good at the practical things that most people are. I’m not stupid. I was just trying to play the game of life as the wrong class.

I was a sorcerer stuck trying to swing an axe to break down the door, when really, I could have just cast fireball and burned that son of a bitch down.

I often joke, “Whoever up there built my character sheet definitely min-maxed me. They had a very specific build in mind.” I feel like I’m probably a sorcerer with high intellect an charisma, but low wisdom (often the “common sense”) and physical stats. I am bright and flashy, charismatic and adept at my inborn abilities, but perhaps a bit lacking in the practical.

I’ve learned to work with my strengths instead of fighting like mad against my weaknesses. I’ve worked on accepting that my character sheet is just built a little differently. I remind myself as much as I can that my character class just wasn’t built for some things.

It’s still really hard. I still have pretty low self-esteem left over from the years of trying to function using another class’s skills.

But thinking of life like Dungeons and Dragons actually helps me out pretty frequently. It helps me realize that people are all built a little different and learn skills at different paces. It helps me think about where I want to put my “experience points” to improve myself, allowing for that fact that my class learns some things fast, and some things slow. I’m still a part of the “team.”

I still have something to bring to the table. I’m getting there and feeling better about myself every day. Because you know what? It’s actually pretty cool to be the sorcerer of the party. 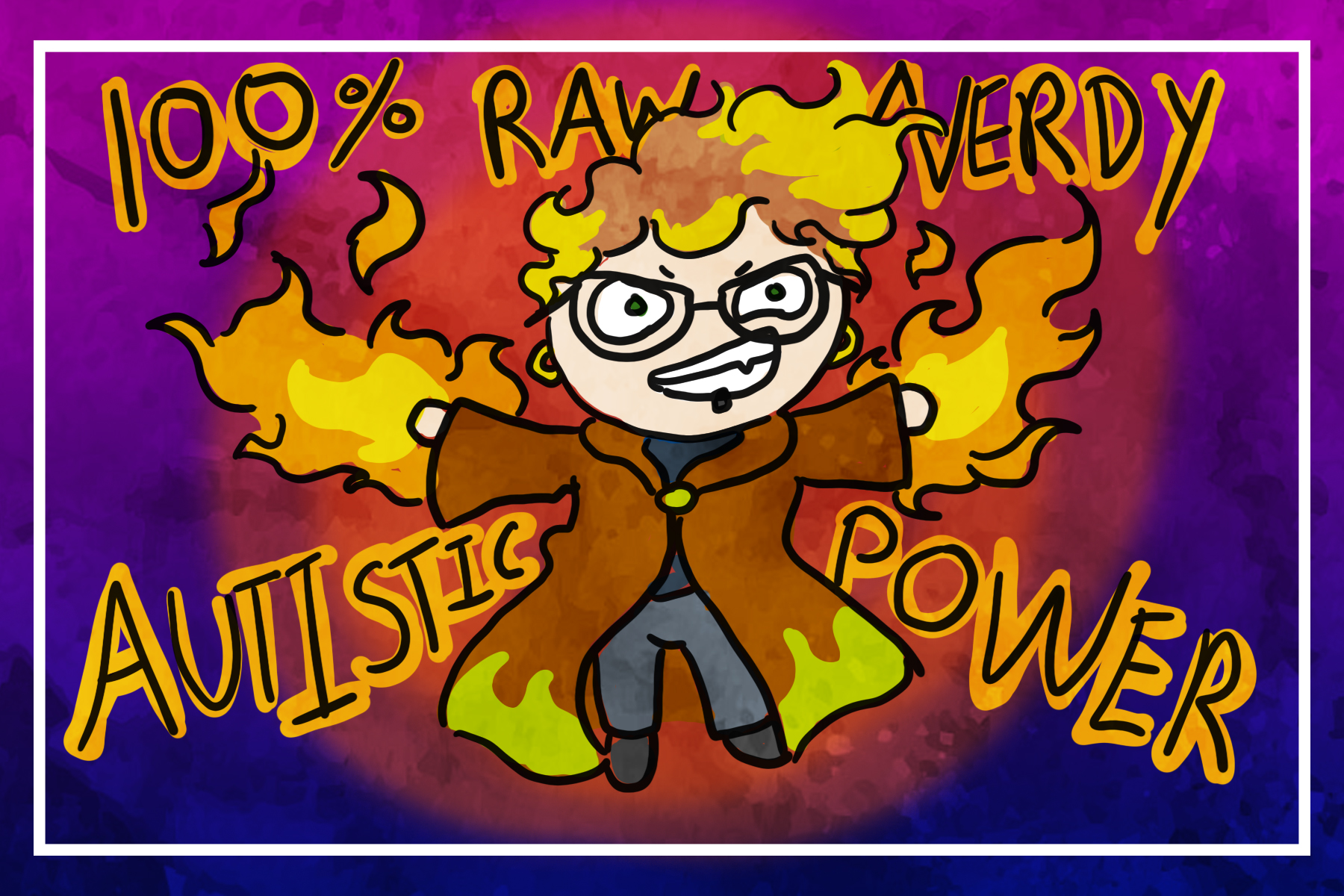 Ra Vashtar is a visual artist, illustrator, writer, and self-described "monster rights activist." Currently Ra works in blogging, monster adoptions, commissioned illustration, video game art assets, and shirt designs for the Hot Topic Creator Program. They find joy and meaning in designing creatures that show even things that are a little different deserve love. Sometimes we all feel like monsters, but monsters are symbols of power and change. Ra is trans nonbinary and bisexual, and believes in advocacy for the LGBTQIA+ and neurodiverse communities through education and visibility. A fiery and funny extrovert, Ra found that through going first and speaking up, plenty of other monsters often echoed out from the shadows, inspired by not being alone.