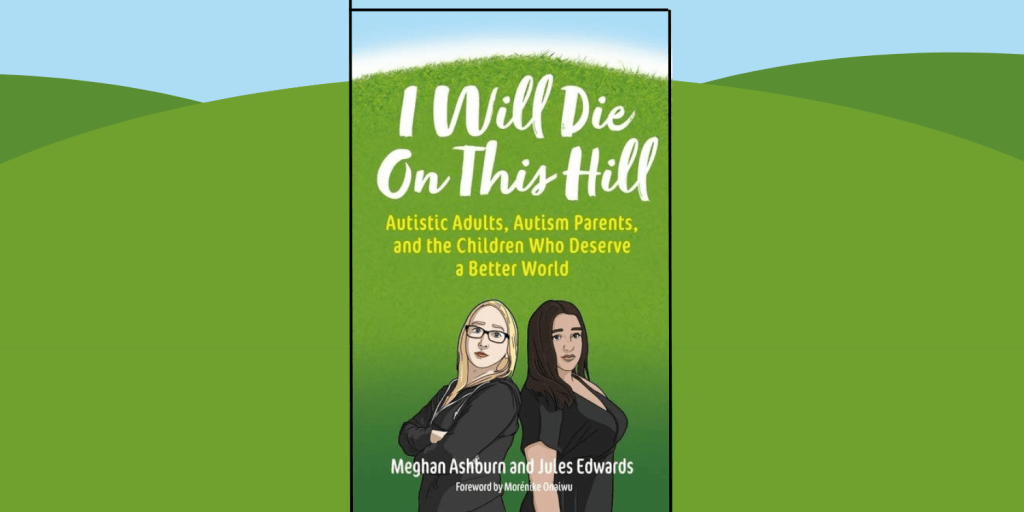 Both autistic self-advocates and allistic allies have lent their voices to the neurodiversity movement through literature, but there has not been an example wherein a self-advocate and an ally are writing a book together.

I Will Die on This Hill by Meghan Ashburn and Jules Edwards seeks to fill that void as a guide to heal the divide between the autism community (non-autistic parents and professionals) and the autistic community (autistic people themselves).

Ashburn from Not an Autism Mom fame and Edwards from Autistic, Typing share incredibly similar, yet wildly unique, perspectives which perfectly bounce off one another, as each chapter rotates between the two. Ashburn is ADHD but not autistic, while Edwards is autistic but was diagnosed as an adult. Guest writers also chime in periodically such as Tee Mone’t from Unmasked.

Edwards and Ashburn, both mothers of autistic children who started in a misinformed place when their kids were first diagnosed, became friends after the former called the latter out for ignorant statements. As they both came to an understanding, they formed an alliance with the mission to make the world a better place for autistic people. The book itself is a great attempt at putting that mission into practice.

After learning from a variety of autistic advocates, Ashburn’s epiphanies shine throughout the text.

As an indigenous autistic single mother, Edwards has a unique perspective Ashburn may not share, but complements it all the same. She is also not shy in being blunt and direct, sometimes sharing uncomfortable truths that must be heard by both autistics and non-autistics alike.

In Edwards’ sections, she also shines light on behaviorism and the impact it has on the psyche of autistic people, while acknowledging how pervasive it is throughout our society and thus how difficult it can be to dismantle. At times, she recounts her experiences being discriminated against as both an autistic and indigenous woman, which can be heartbreaking but also eye-opening for those who don’t experience intersectional prejudice.

The biggest theme throughout the book that both authors highlight is how parents (both neurodivergent and neurotypical) can embrace autistic self-advocates and vice versa.

Both parents and autistic advocates are praised for their strengths, but also educated in areas where the groups may need work. For example, Edwards notes the lobbying power parents have and the lived experiences of autistic advocates. On the flip side, she mentions how parents often deny an autistic person’s disability online for their typing abilities, as well as highlighting the harm of autistic advocates talking down to misinformed parents who use outdated language instead of supporting them to learn.

Overall, I Will Die on This Hill is a balanced book that shows the benefits parents and autistic self-advocates offer on their own, as well as the unstoppable activist force they could be if they worked together. To know the extent, it is best to read the book on one’s own time. For extensive notetakers (like myself) and those who want to make a difference for autistic people everywhere, this book is for you. I Will Die on This Hill releases January 19, 2023.