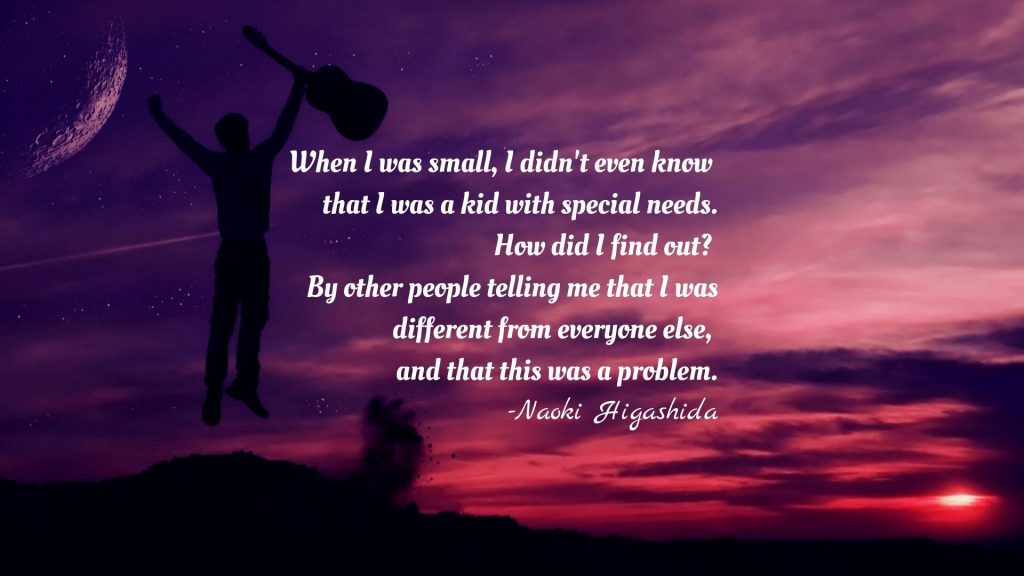 As a result, many of their pages have been deleted.  The Aspergian, in an act of purposeful protest, is reposting the articles which have been removed.  We have added links to the author’s personal sites, and encourage all autistics and allies to read more from non-speaking autistics.  Click here for other articles deleted from Wikipedia or to read about efforts to silence autistics.

Naoki Higashida (東田 直樹,Higashida Naoki, born August 12, 1992) is a Japanese poet, novelist, and essayist. He is one of the most famous writers in Japan. [4] Higashida was diagnosed with autism at the age of 5. [6] He was not able to make himself understood to people around him, and his behaviour was considered erratic.

Despite his disability, Higashida quickly took to learning Japanese characters. By attending a nearby cram school, he was able to better express himself. Soon he began writing Japanese characters with the help of adults who assisted by guiding his hand. He was able to express some of his emotions. Higashida’s mother noticed his power of expression and encouraged him to write poems and short stories. At the age of 11, and again when he was 12, Higashida won first prize in the Grimm Fairy Tales Contest, a story-writing competition.

Since 2004, Higashida has published more than twenty books of fiction and non-fiction. The Reason I Jump was published as a book in 2007 [8] when Higashida was 13, and it features 58 often-asked questions about his autism and his frank, sometimes startling, answers to them. The book was a hit in Japan, and its discovery and subsequent translation into English by David Mitchell and his wife, Keiko Yoshida, [9] brought it to audiences all around the world when it was translated into 30 further languages. [10] The English translation was published in 2013 and soon topped the best-seller list of Amazon’s U.S. and British sites. [6]

Higashida’s second major translated release, Fall Down 7 Times Get Up 8 , was released on July 11, 2017. Keiko Yoshida and David Mitchell provide the translation for this book as well. [2] [2]

[4] “Rise of the autie-biography: A Japanese author writes about coping with autism”

[7] “Autistic author has a runaway bestseller on his hands”

[10] “David Mitchell: almost everything I’d been told about my son’s autism was wrong”