Event: N is for Neurodivergent: The Parables of the X-Men with Tré Ventour-Griffiths 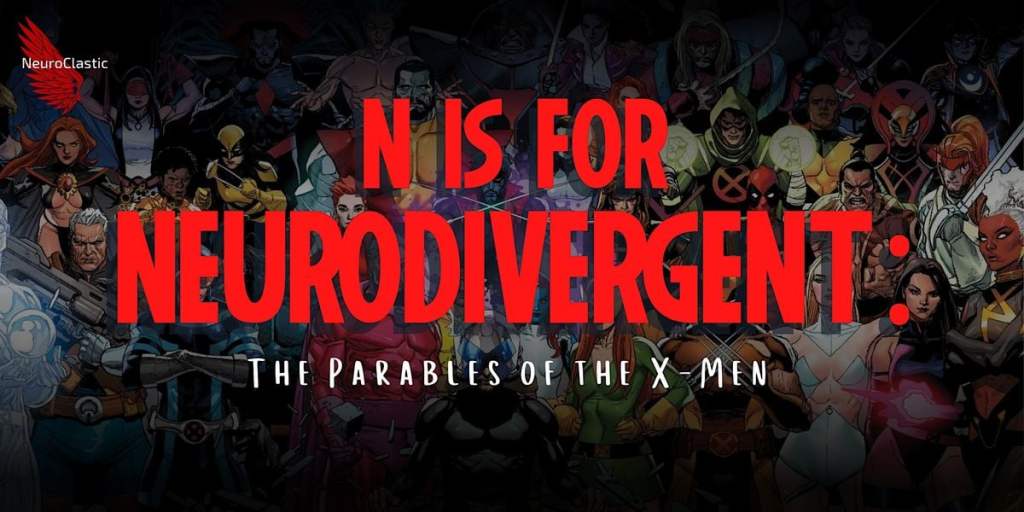 Join NeuroClastic and Autistic practitioner-academic, creative writer, author, and historian Tré Ventour-Griffiths for a webinar on February 22, 2023, as he explores Marvel’s X-Men through the lens of neurodivergence.

When: February 22, 2023
Time: 11:00 am Pacific, 2:00 pm Eastern, 7:00 pm GMT (UK)
Where: Worldwide virtual webinar
Registration link: Click here to register
Price: Event is free with option to donate
Recording available: Recordings are available for a fee of $10 and can be purchased at the above registration link

Disclaimer: NeuroClastic and Tré Ventour-Griffiths do not own the rights to any images, copyright, trademark, or plot design of Marvel Entertainment, which is owned by The Walt Disney Company. References to copyrighted and trademarked material belonging to Marvel Entertainment and Marvel Studios are used in accordance with Fair Use provisions for the purpose of scholarship, commentary, and education.

Through themes including crises of identity, childhood bullying, and institution violence (i.e through eugenics), academic Tré Ventour-Griffiths argues Marvel’s X-Men is a metaphor for neurodivergent lives – no less than navigating lives punctuated by expectation, trauma, and abuse.

The term ‘neurodiversity’ (Singer, 1998) was first coined by disability activist and academic Judy Singer “… whose 1998 honors thesis argued that neurological differences constituted a new category of political engagement by marginalized classifications” (McGee, 2012). Meanwhile, as Talia Lewis (2020) writes, “Ableism forms and informs violence oppression, and incarceration, yet it continues to be ignored by social justice movements.” And more recently, the term ‘neurodivergent’ has been used to describe people that operate atypically to the so-called ‘neuromajority’ – including genetic differences, developmental neurotypes, life experience and traumatic brain injuries (Autism Voices United, 2022).

On our cinema and TV screens, this has privileged white people (Onaiwu, 2020; The Autistic Advocate, 2022). But if we extended the gaze to perceived neurodivergence, the scope for representation is unlimited – no less than the superhero team known as the X-Men (Lee and Kirby, 1963) whose stories may allegorise neurodivergent experiences of violence – from being called “superfreaks” in a school system that upholds bullying, all the way to hate groups that want to use genetics to “cure us.”

As a victim of bullying in school and at work, Charles Xavier’s School for Gifted Youngsters has been an inspiration for me. Long have we neurodivergents been shunned by institutions including police (Crane, Maras et al, 2016; Walawalker, 2021) education (Ventour-Griffiths, 2022; Divergent Perspectives, 2022) and healthcare (Williams, Godfrey et al, 2022). “No more hiding, no more suffering. You have lived in the shadows, and shame and fear for too long,” says Magneto (Singer, 2014), while neurotypical societies are paralysed by hatred, much in the image of fictional anti-mutant hate groups like The Purifiers.

Neurodivergents are often misunderstood, judged, and discriminated against. Growing up, I was called “freak” and “strange” in need of curing (Twitter, 2022) uncoincidentally mirrored in various X-Men storylines (Byrne, Claremont et al 1980; 1981; Edens, Harras et al 1993; Whedon and Cassaday 2004; Singer, 2014). “To homo neanderthalensis, his mutant cousin, homo sapiens, was an aberration,” writes Charles Xavier in his thesis on genetics (Vaughn, 2011). Do we have superpowers? Unlikely, and I wouldn’t claim my traits, including chasmic pattern observation and deep focus, as extreme G-Force!

While many ‘divergent’ neurotypes could be considered mutations – as genetic variants that can be hereditary and passed on – I have long seen the X-Men mutant metaphor as a vessel for my own experience. In this lecture, I will discuss the X-Men as a neurodivergent cultural text. Ahead of its time, only now am I realising its importance in my childhood. And as a historian-sociologist the role of the “superfreaks” allegory in superhero screen texts today, continues to teach me lots about disability (in)justice as the line between supremacy and survival in a global west is violent in every universe.

Tré Ventour-Griffiths is a neurodivergent practitioner-academic as both a Public Historian of Black British History and a creative writer. His work has been published in zines, edited books, and journalism, while he has also worked with organisations in the arts, education, third sector, and others on various projects linked to race and disability.