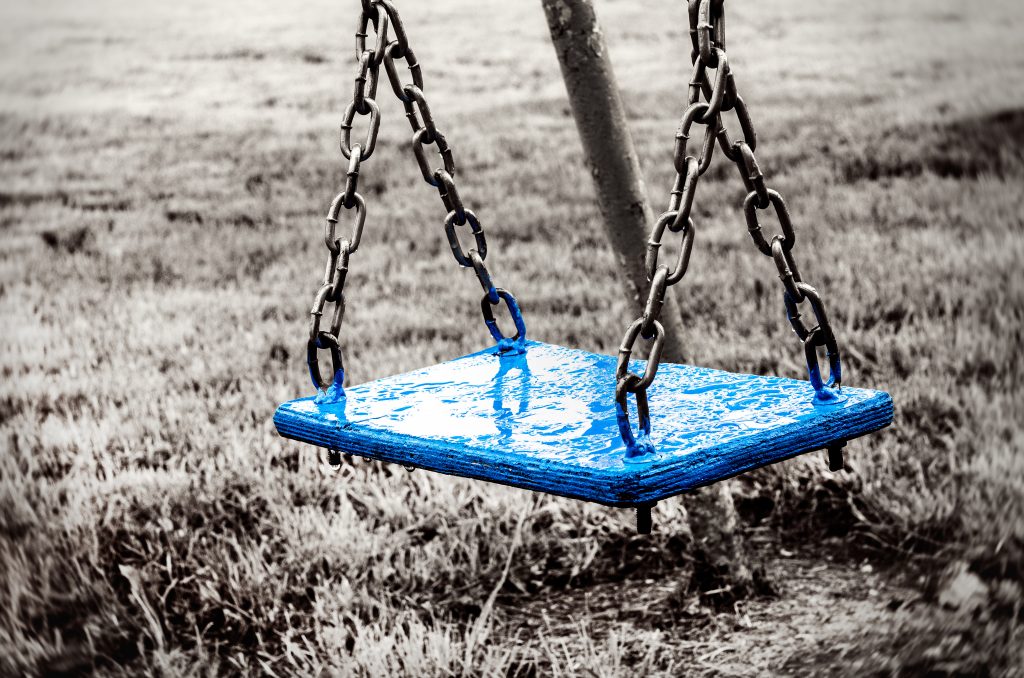 I always knew I was different. Maybe I’m just super introverted, I thought. Or eccentric. Maybe it’s a touch of selective mutism, or a little sprinkle of social anxiety here and there.

Spoiler alert: it was autism.

But even though I didn’t know I was autistic, I still picked up several unspoken lessons about how to act in the neurotypical world. Or rather, how to bury my autistic traits so deep that even Adult Me, a teacher with special education training, couldn’t recognize them until I was twenty-eight.

As a kid, I spent hours on my swing set. Something about the repetitive motion–up in the sky then back down to earth–let my thoughts flow freely. While most of those thoughts had to do with Harry Potter (more specifically, becoming friends with Harry at Hogwarts), I also had my best creative moments, making up stories and characters.  It was pure, unadulterated joy.

“That kid could swing all day,” my parents told our neighbors.

I paused. They weren’t saying it in a bad way, but it made me self-conscious. The calling-out-ness of it. “Oh, you’re different,” it said, and people comment on you when you’re different.

I couldn’t stop stimming (a sentiment most autistics share), but I did learn to feel ashamed of my stims.

“Why are you always so serious?” my friends asked.

I was puzzled. I wasn’t serious; would a serious person nickname their cheerleading squad old fashioned boys’ names like Cornelius and Thaddeus? I just preferred in-depth philosophical discussions to gossip. I honestly couldn’t understand why others didn’t.

No one cared about my “seriousness” when I was the only friend who listened to their family problems and insecurities. Yet now all I heard was “you’re too serious,” and “shut up.”

To this day, I still have trouble talking. When in doubt, I clam up.

The lesson that hurts the most came from the recess yard, at the expense of two “weird” kids, Anna and Phil.

“God, Anna’s so annoying,” my friends said. “Why can’t she tell that we don’t want to hang out with her?”

“Yeah,” I mumbled, but I was uncomfortable. It was the same feeling I got around Phil, who humiliated himself to amuse the other boys, all because he didn’t know how to make them like him.

Because I was just like Anna and Phil. I didn’t know the word autism, but I felt an invisible connection to them, a strange kinship. Somehow, instinctively, I knew we were the same. The only difference was that I got the shut up memo and they didn’t.

As I passively watched my classmates mock and belittle those (likely autistic) kids, I learned a few things about getting by in this world.

Anna and Phil are weird kids.

I better hide who I am, or they’ll hate me, too.

This is what every kid on the spectrum learns at some point. Autistic kids are observant little things, and they pick up on it. Even if it’s not outright bullying, there are still so many subtle ways and tiny interactions that tell autistic kids, again and again, to hide who they really are.

That’s how it was when I was a kid. Hopefully, it won’t be that way for the next generation.