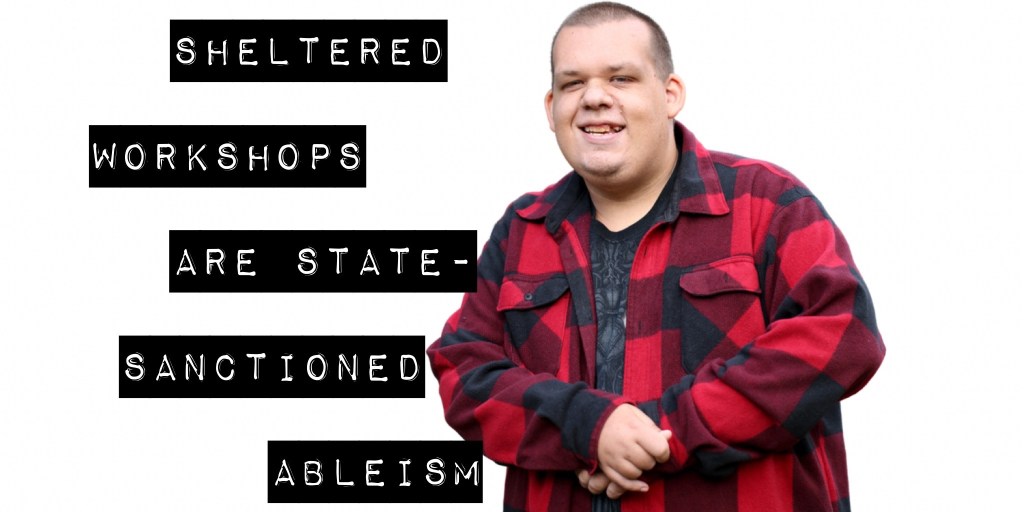 Self-advocates and organizations like the Autistic Self-Advocacy Network (ASAN) are leading the charge in ending the barbaric practice which is sub-minimum wage. Simply put, sub-minimum wage is a payment that is less than minimum wage.

The practice was enacted in 1938 as part of the Fair Labor Standard Act (FLSA) intended for wounded veterans returning from war. Currently, subminimum wage is legal for “individuals whose earning or productive capacities are impaired by a physical or mental disability, including those related to age or injury, for the work to be performed.” (Source) This is to ensure that disabled people can still be employed in a “competitive” industry.

The people who get paid a sub-minimum wage work in sheltered workshops, where they complete menial tasks such as attaching buckles or separating plastic bottles. A great example of this is Goodwill, where disabled workers earn “far less than the minimum wage, while some executives earn hundreds of thousands of dollars,” according to NBC News.

While many would agree that such a practice is archaic, there are some organizations like the National Council on Severe Autism (NCSA) who are fighting to preserve the sub-minimum wage.

They’ve gone as far as to call me delusional on their Facebook page for suggesting workers in those workshops should be paid more.

In one article from NCSA, they claim that “It’s not about the money for these workers. It’s about the pride, accomplishment and self-esteem, the ability to get up in the morning, go to work, and then come home and brag that they accomplished something that day.”

While there is nothing wrong with having a sense of pride or accomplishment from working, everyone who works, no matter what their tasks are, should be entitled to minimum wage at the very least.

There’s a reason it’s called minimum wage. Exceptions should not be made for certain people just because they’re disabled. And if that means the CEO of Goodwill makes less money each year, that is what’s fair and just.

The writer of the article argues that parents would have to quit their jobs to take care of their children if sheltered workshops were shut down, but employment services are not respite care. Advocating for greater services so the adults could live in the community would remedy that problem.

Another solution would be for businesses that are considered “competitive” to start hiring disabled workers. Employers can work with consultants specialized in disability employment to learn how to accommodate and empower disabled employees to be able to thrive in these positions.

But to get there, a great deal of societal change needs to be strategized. It is not a magic bullet solution that can happen overnight, as all of society’s institutions that have upheld these systems that were created decades ago during an era when it was acceptable to hide disabled people in basements and lock them in institutions.

It’s only been in recent years that such a change does not seem so distant, especially with the Obama administration’s changes to laws that disadvantage disabled people. However, our society still has a long way to go until all disabled people, no matter how their disability manifests, can be afforded the dignity of earning a livable wage.

NCSA is not wrong for wanting employment for disabled adults. Any parent wants their children to do activities which makes them feel fulfilled and happy. What seems illogical, though, is to want to keep that system while also allowing the workers to make less-than-minimum wage.

That is not activism. Activism is fighting to change systems so that everyone benefits. Sheltered workshops wouldn’t be as horrific as they are if the people working there were actually paid enough to be able to feed themselves. Many of those in sheltered workshops also live in assisted-living facilities funded by Medicaid, but it would be progressive and beneficial if they could live there while also making at least a minimum wage from the work they do.

A video covering Goodwill by the YouTuber iilluminaughtii exposes just how despicable sheltered workshops can be toward their employees.

A blind woman, Sheila Leigland, who was working there for a little less than $4 an hour, was told by her employer that her pay would be dropped to $2.75, prompting her to leave. This was after having worked there for four years.

In another article in Forbes, Leigland elaborates by saying that disabled employees are put through a test where they have to hang 100 garments with no errors in 32 minutes. Because she’s blind, it was impossible for her to look at the garments and see their sizes, but she was forced to do the test anyway.

Depending on how slow the person is in completing the task, Goodwill lowers the hourly wage. This is proof that employees’ rights need to come before the business, as lowering someone’s earnings below minimum wage because of how fast or slow they can do a task not suited to them or provided accommodations is unacceptable.

Leigland’s wage was definitely not the lowest wage Goodwill has paid. According to the documentary, Bottom Dollars, employees have been paid as little as $2.53/hour (Grand Island, NE), $1.51/hour (Birmingham, AL), $0.40/hour (Branford, CT), and $0.02 (Cincinnati, OH). With a wage as little as two pennies, while executives are making over six figures, there is no denying that they perceive disabled employees as not deserving the same amount of money as everyone else.

A fair alternative that iilluminaughtii posits in the video is that if employers need a greater motivation to hire disabled employees, they should expand the tax breaks or tax incentives offered when hiring such people. The workers can also get paid a livable wages, making it a win-win scenario.

Only time will tell. For the time being, spreading awareness and petitioning elected officials will help us to start disempowering the attitudes towards adults with disabilities– like those from the NCSA that hold these ableist systems in place.

Disabled people need to live in a world wherein they are not automatically devalued as deserving less than the minimum allowable standards afforded to everyone else.