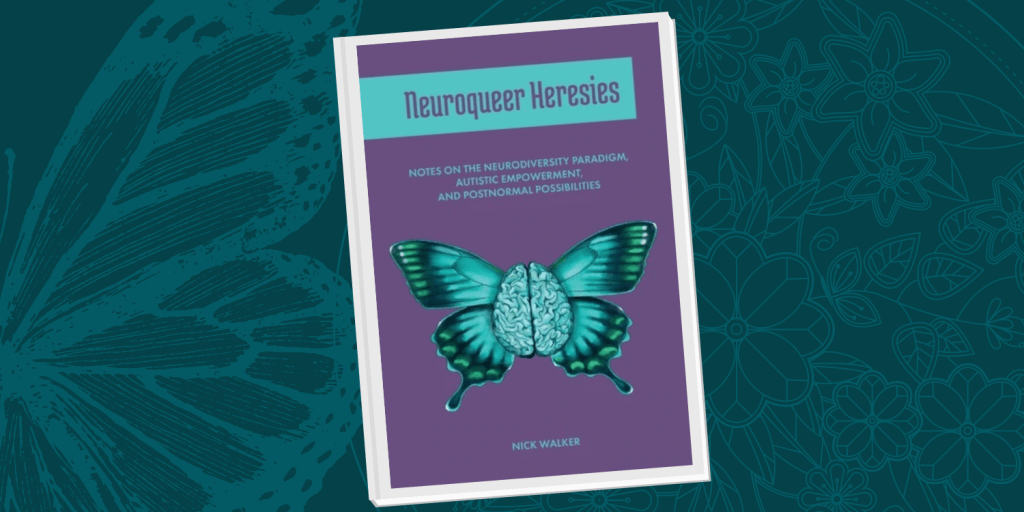 Every so often, our community is gifted a piece of work so important that it changes the lives of those who engage with it. For me, this was the recently-published book, Neuroqueer Heresies, by Dr. Nick Walker.

This book is vitally important, and I recommend that every person with an interest in Autistic people read it. I was honoured to have the privilege of interviewing Dr. Walker about her book, and gaining some insight into some of the topics covered in this incredible piece of writing.

You talk of the embodied mind or “bodymind” frequently in your book, rather than “mind” or “neurology.” Where does your understanding of the bodymind fit into neuroqueer theory?

The conceptualization of neurodiversity as diversity among bodyminds has been central to neuroqueer theory from the start.

The term bodymind points toward an understanding that mind is an embodied phenomenon, and that mind and embodiment are inseparably entwined. The embodied nature of the mind is a fundamental premise of somatic psychology, a field in which I’ve long been involved as a student, practitioner, and educator.

I mention in the book that I originally came up with the term neuroqueer in early 2008, in a paper I wrote for Dr. Ian J. Grand’s Psychodynamics class in the Somatic Psychology graduate program at California Institute of Integral Studies.

On the first day of that class, Dr. Grand summed up the underlying premise of somatic psychology like so: The psyche is somatically formed and organized. Meaning, in other words, that one’s psyche and selfhood are developed through processes of bodily experience and action, with the implied corollary that new bodily experience and new habits of bodily action have the power to effect significant mental transformations.

My orientation as a scholar is transdisciplinary, and part of what attracts me to transdisciplinarity is how generative it can be to look at a given concept or phenomenon through a variety of different disciplinary lenses.

And then you look at M. Remi Yergeau’s work, and it’s full of all these fresh mind-bending insights, because Yergeau’s approach to the topic of neurodiversity is based in the field of rhetoric––and that’s a whole other lens that reveals entirely new potentials of the topic.

To come the the point, then: neuroqueer theory is what emerges when one takes an approach to the topic of neurodiversity that’s based largely in the fields of queer theory and somatic psychology.

It’s worth noting, by the way, that in recent years the term bodymind has been showing up with increasing frequency in the field of disability studies. As you can probably guess, I see this as an excellent development. But a lot of people who’ve been using and/or appreciating the term in disability studies are unaware that it originates in the field of somatic psychology.

Almost every time I see the term bodymind used in a piece of writing in disability studies or some related field these days, Margaret Price’s excellent 2015 article, “The Bodymind Problem and the Possibilities of Pain,” is cited as the source of the word.

I love Price’s work and the way she’s integrated the concept of bodymind into disability scholarship, but she sure as heck didn’t coin the term! The actual first published use of the word bodymind was a somatic psychology text entitled Bodymind, written by Ken Dychtwald way back in 1977. “

The path toward a neurocosmopolitan perspective––on either an individual or collective scale––necessarily involves learning to recognize our internalized standards of neuronormativity as culturally constructed and culturally instilled, and then freeing our minds from the limits of those standards.

Besides neuroqueering, what are the first steps towards a neurocosmopolitan world?

In order to build any kind of better future, it’s essential to have some sort of positive vision to work toward. In order to create something positive and good, one must first be able to imagine it.

So one crucial first step is for all of us to engage our creativity and awaken our sense of the possible, and start generating individual and collective visions of neurocosmopolitan futures that inspire us.

Another crucial step is to produce more and more literature, art, educational material, and entertainment that decenters the neurotypical perspective and the neurotypical gaze––in other words, work which not only is grounded in non-neuronormative perspectives, but also refuses to assume that the default reader or viewer is neurotypical.

Speaking of creativity, you talk of neuroqueer speculative fiction in the book. What are some of the best examples of well done literature in this genre that you would recommend?

Two authors who stand out for me as being on the leading edge of the emerging field of neuroqueer speculative fiction are Dora M. Raymaker and Ada Hoffmann.

Dora M. Raymaker’s published fiction so far includes the brilliant sci-fi detective novel Hoshi and the Red City Circuit, the short story “Heat Producing Entities” (which appears in Volume 3 of the annual Spoon Knife neuroqueer lit anthology), and the epic novel Resonance, which will be published sometime in 2022 (I’ve already read Resonance because I had the honor of being Raymaker’s editor on it, and I’m eager for everyone else to read it).

Ada Hoffmann is best known so far for the Outside series, which so far includes her first novel The Outside and its sequel The Fallen. It’s going to be at least a trilogy; there’s a third book in the works already.

In addition to being thoroughly neuroqueer, these fabulous books are also gripping space opera tales grounded in the best classic sci-fi traditions. Hoffmann has also produced a lot of extraordinarily good and thoroughly neuroqueer short stories and poetry, much of which can be found in the collection Monsters in My Mind.

Like Raymaker, Hoffmann’s also got a delightful story in Spoon Knife 3, “The Scrape of Tooth on Bone,” which genre-wise might be best described as “neuroqueer steampunk.”

Spoon Knife is the first anthology series that’s specifically devoted to neuroqueer literature. It’s multi-genre (or genre-queering), so it includes neuroqueer speculative fiction but also other neuroqueer fiction in other genres like magical realism (for instance, the story “Only Strawberries Don’t Have Fathers,” contributed to Spoon Knife 3 by legendary poet Judy Grahn, or Craig Laurance Gidney’s “Coalrose,” which appears in Spoon Knife 5).

Spoon Knife also accepts short memoir pieces and poetry, so each volume offers the reader quite the diversity of experiences. As far as neuroqueer speculative fiction goes, Alyssa Gonzalez and Verity Reynolds are two more authors whose contributions to multiple volumes of Spoon Knife are excellent examples of the genre.

And of course, I should mention my own work in neuroqueer speculative fiction, and the work of my longtime friend and collaborator Andrew M. Reichart. Andrew and I are co-creators of an ever-growing collection of interconnected stories which we call the Weird Luck Saga.

If people only took one message away from reading your book, what would you hope for it to be?

It depends very much on who the people are, and where they’re at in their own particular journeys when they encounter the book. My hope is that each reader will find some message that’s life-changing in a positive way, but that’s going to be a different message for some readers than for others, depending on who they are and the present conditions in their lives.

There are a lot of ideas packed between the covers of Neuroqueer Heresies, and one never knows which idea is going to be most transformative for a given individual.

Regardless of which specifics resonate with different readers, my hope is that in some way or another the book will awaken in each and every reader an expanded sense of the possible. My hope is that the book will inspire readers to explore of the infinite realms of creative potential that lie beyond the walls of normativity.

Anyone who wishes to purchase this book can find it through Amazon and the books publisher Autonomous Press.