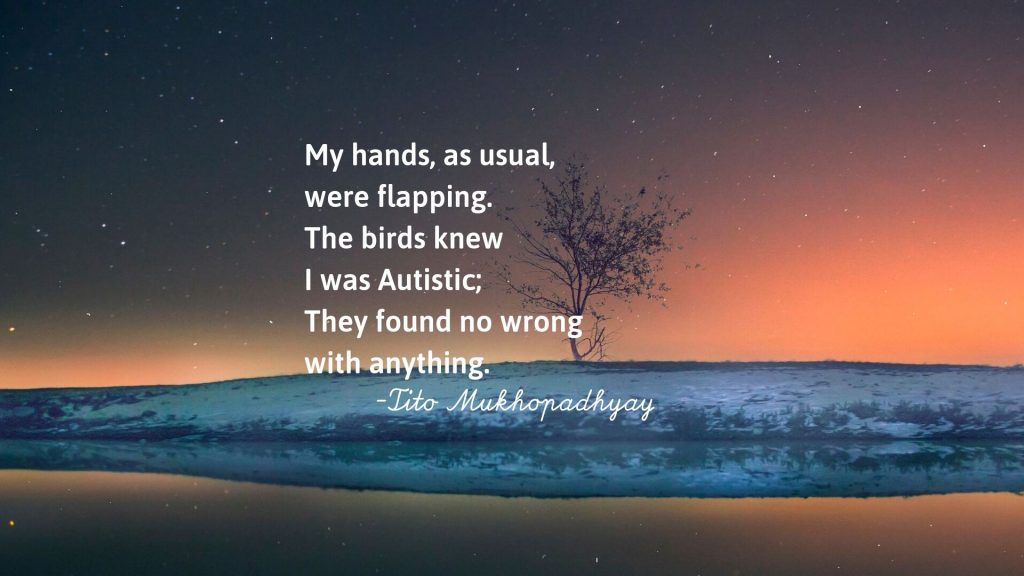 As a result, many of their pages have been deleted.  The Aspergian, in an act of purposeful protest, is reposting the articles which have been removed.  We have added links to the author’s and organization’s personal sites, and encourage all autistics and allies to read more from non-speaking autistics.  Click here for other articles deleted from Wikipedia or to read about efforts to silence autistics.

Tito Rajarshi Mukhopadhyay (born 1989 in India) was diagnosed in early childhood with severe or low-functioning non-verbal autism. He first came to the attention of the West through autism researcher Richard Mills, who met Tito in Bangalore, India[1] and arranged for him to travel to the UK to be assessed by his colleagues at the National Autistic Society and Lorna Wing. At the same time the BBC made the documentary, Tito’s Story (2000), and the National Autistic Society published his first book, Beyond the Silence (2000). He provides insights into the nature of his autism, according to Autism Speaks, the former Cure Autism Now, and scientists who studied his case, such as Michael Merzenich.[2][3]

Tito’s mother, Soma, taught him reading and writing.[2][3] Cure Autism Now (now merged with Autism Speaks) sponsored Tito and his mother to travel to the United States so she could teach them her method, called the Rapid Prompting Method.[3]Tito’s first book, Beyond the Silence: My Life, The World and Autism, a collection of prose, poetry and philosophical texts, was published in 2000. In the book, he reflects on how being autistic affects his view of the world.[4]

Tito was born in India and raised there by his mother Soma Mukhopadhyay. His father lived and worked in another city, visiting occasionally. When Tito was 18 months old, his mother noticed that he was not responding socially as other toddlers were. He did not make eye contact as expected, he distanced himself from social settings, and he did not talk.[4]

Beginning when he was about 2 1/2 years old, Soma began intensively teaching him basic motor skills, such as pointing, by physically moving his limbs through the motions herself until he learned the movements.[6] After his autism diagnosis at age 3, she decided to continue educating him “using methods she would make up as she went along.”[2]

Soma noticed that her son had a good memory with roads and room layouts and would make complex patterns with match sticks. She started trying to teach him to recognize numbers and letters on an alphabet board, then moved on to teaching him to draw them. When he could not hold a pencil, she would secure one to his hand with a rubber band. Soma also read classic works of English fiction to him, and since he began writing on his own at age 6, has urged him to write stories himself.[4]

From Scientific American journalist, Madhusree Mukerjee, Soma “observes him with profound intensity and snaps her fingers the moment Tito’s thoughts stray–which is all the time during my visit. He seems to be beset by random neural firings. If she didn’t intervene, Soma explains, he would write words from a different sentence in the middle of the one he already started.”[5]

In 1999, when Tito was 11, he and Soma visited the National Autistic Society‘s Centre for Social and Communication Disorders. Researchers spoke with him, and observed him spelling out responses with a letter board independently. He was assessed on the British Picture Vocabulary Scale, a test in which he had to point to one of four pictures to correctly identify the meaning of a word. Tito’s score put him on par with 19-year-olds.[6]

While visiting, he demanded a promise that the book he had written would be published.[6] As requested, Breaking the Silence was published by the National Autistic Society the following year.[4]

In the time since, Tito has continued to write every day. In his words, “I need to write. It has become a part of me.”[4]

Tito continues to write daily, preferring to use handwriting over typing as a mode of communication.  His interests include literature and philosophy, and he credits Dr. Ralph Savarese (literature) and Dr. Erin Manning (philosophy) as being inspirational mentors.  He is an active Facebook user and responds to daily inquiries about autism, philosophy, and literature.

There was the earth, turning and turning.
The stars receded, as if
Finding no wrong with anything.

Birds flew by all morning—
The sky lit
From the earth’s turning and turning.

My hands, as usual, were flapping.
The birds knew I was Autistic;
They found no wrong with anything.

Men and women stared at my nodding;
They labeled me a Misfit
(A Misfit turning and turning).

And then I was the wind, blowing.
Did anyone see my trick?
I found no wrong with anything.

Somewhere a wish was rising,
Perhaps from between my laughing lips.
Why stop turning and turning
When right can be found with everything?