Here is a harsh reality — there are elevated rates of mental health conditions such as depression and anxiety among autistic people (Cage & Troxell-Whitmann, 2019; Lever & Geurts, 2016). There is also higher suicidality in the autistic population compared to the general public with 66% of autistics having contemplated suicide compared to 17% in the general population (Cassidy, Bradley & Robinson, et al., 2014; Segers, 2014; Zahid & Upthegrove, 2017).

Further, autistic people who report engaging in or having more “autistic traits,” that is behaviors such as, hand-flapping, rocking, and other traits that are stereotypic of the autism spectrum as defined by clinical measures (e.g., the ADOS and the Autism Quotient), are at higher risk of mental health symptoms and suicidality (Pelton & Cassidy, 2017; Takara & Condo, 2014).

However, it is also true that autistic people who engage in masking or camouflaging their autism, i.e., hiding or suppressing those autistic traits, are ALSO at higher risk for these conditions and suicidality above and beyond other predictors such as employment status and gender identity (or assigned sex at birth in some research) (Cassidy et al., 2018).

In addition to these findings, it is well documented that society is often not supportive of the differences and neurodivergence of autism. That which goes against the norm is often condemned in our society. Not surprisingly, then, many autistic people end up using ways to blend in and camouflage in an attempt to be able to pass as neurotypical and “fit in.”

This may be imposed upon autistics. In fact, it is often taught or forced through very common and traditional behavioral educational approaches that promote compliance and conformity and the extinguishing of “autistic behaviors.” However, autistic individuals can also acquire similar skill sets implicitly, as it can be learned through observation of interactions between neurotypical peers, or from media sources. Collectively, these sets of techniques, strategies and processes of hiding or suppressing one’s natural autistic way of being are referred to as masking.

Perhaps most importantly, masking is hardly ever just one or a few of these strategies, and it is not a rare or infrequent activity. Masking is using any and all strategies and keeping track of when and how to effectively use them. It is relentless vigilance to squelch what is natural and instead enact what is known to be the norm.

Masking is a lot of knowing precisely what to do (norms) and what not to do (do not be your authentic self), but not having any natural inclination towards what is supposed to be done and not having any understanding of or belief in why these are the norms and why such social ramifications exist for not conforming.

For many autistics, the mask stays on all or most of the time, and it has been found to be a very common experience for autistic people (Bargiela et al., 2016; Hull at al., 2017), though gender differences have also been observed. Whereas approximately 90% of autistic people reported having masked or camouflaged autistic traits, those who identified as female were found to engage in masking more frequently on a daily basis and for longer durations over the course of their lifetimes (Cassidy et al., 2018).

The reasons offered by autistic people for masking are varied and diverse. In one qualitative study, autistic young adults gave over 20 different reasons for masking including that it was what they must do to be taken seriously, to perform well at work, to reduce awkwardness, to be able to get along with peers or co-workers, to fit in, to get a job, to make friends and to appear responsible (Cage & Troxell-Whitman, 2019).

Many of these outcomes – getting a job, making friends, or being taken seriously, for example – could be considered positive and helpful for increased quality of life, and many are highly desired by autistic people. Furthermore, some autistic individuals are so adept at masking and passing as neurotypical, that they are “missed” in terms of receiving an autistic diagnosis. They may navigate their entire life or a large portion of it without a diagnosis and with everyone around them believing they are completely fine or even thriving.

There are many accounts of autistic people highly skilled at masking being regarded as “model students” by their teachers or funny, witty, and charismatic by their peers – so, is masking a good thing?

Being able to “PASS” for neurotypical is not a Positive Outcome.

As described above, the presentation of stereotypical “autistic traits” is related to poorer mental health and increased risk for suicidality, so is there a positive side to suppressing these traits and masking? The short answer is, NO. Though much more research, and particularly research that is inclusive of autistic researchers and input from the autistic community is severely needed, what we do know is that masking comes at a very high cost despite helping the person to navigate their day without attracting attention. For example:

Why the connection? What are the links between masking and mental health symptoms?

Research is currently lacking in terms of WHY this connection exits, but anecdotally, the autistic community has shared many personal and powerful pieces about it.

Masking is not natural. It is forced. To me, masking is kind of like putting on a show all the time, if the show is being performed in a foreign language, and the venue and scenery both change constantly without warning, and the audience is hostile and no matter what you do, it always seems to appear that the other actors and actresses cast in the show are naturals and they are waiting for you… perhaps it’s your line? Perhaps you’re supposed to exit stage left? Perhaps this moment of silence is simply written into the script?

And you never know how your performance was rated or received, except for the fact that you keep on getting asked to play this part. It’s doing things you know you are supposed to do because you have seen them done multiple times in X situation so long as person Y says Z and A, B, or C. It is a long and exhausting script of which you have no understanding, and it is further complicated by the fact that hardly any of the lines or plot action are natural responses for you or what you would have predicted based on what you see and how you interpret the world.

This act takes constant vigilance, control, and effort, and it is not only exhausting, but extremely damaging. It is damaging physically, mentally, and emotionally. It wears you down and drains your cognitive energy and resources; it makes you feel physically weak and exhausted; and it reinforces to you that you cannot be you; that your natural ways are not acceptable and that the world would rather suck the life out of you each day than experience your authentic self, which might be the most damaging of all.

Given what we know about invalidating personal experience and identity, suppressing what is natural regarding emotional experience and expression, physiological stress responses generally, and how duration and intensity can influence all of these, the link between masking and mental health comes as no surprise to those of us who have worn or must continue to wear the mask.

How can I help? 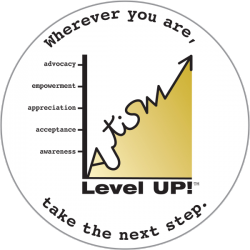 Autism Level Up!
Autism Level UP!
A partnership of two developmental psychologists, one neurodivergent (Dr. JÂcqûelyn Fede) and the other neurotypical (Dr. Amy Laurent).Our philosophy is that through education, accessible resources, practical strategies and a commitment to consistently incorporating the experiences and perspectives of autistic people, we can support the leveling up of society when it comes to autism and neurodiversity. Of course, our primary goal is to support autistic individuals, but the more we are able to spread real awareness and support others in moving from awareness to acceptance, acceptance to appreciation, appreciation to empowerment and from empowerment to advocacy, the more positive change we will see at those large institutional and societal levels that can greatly benefit the autistic community. So we do aim first and foremost to empower autistic individuals to navigate their world, but we also aim to make the world a more autism-friendly environment and the universe more accommodating to the neurodiverse - after all, it is a partnership and change should not rest solely on the shoulders of the autistic community.

Latest posts by Autism Level Up! (see all)