From collective delusion to creative collaboration 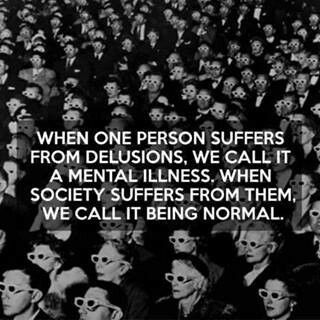 If you consider any potential outcomes beyond a ten year time horizon the current path of industrialised “civilisation” must be described as a form of collective delusion.

When I use the term “collective delusion” I am referring to a the most extreme form of cultural inertia that can affect a group of people. A couple of useful working definitions:

Cultural inertia : The tendency within a society to maintain an established set of social practices, norms, technologies, and metrics, even in the face of changing environmental conditions.

Cultural inertia can be beneficial when social practices, norms, technologies, and metrics buffer a society from the detrimental effects of short-term random fluctuations in environmental conditions (think of floods and droughts, and events such as earthquakes).

Paradigmatic inertia : The tendency within a “civilised” society to maintain established institutional structures, i.e. complex social groups with specific social roles, even in the face of long-term shifts in environmental conditions away from earlier long-term averages.

Paradigmatic inertia is never beneficial. It constitutes a collective learning disability. Unless it is identified, understood and addressed by shifting to a more appropriate paradigm (or mix of paradigms) that acknowledges the shift in environmental factors (and potentially the inability to reverse the trend), it can result in existential risks for entire ecosystems including humans (think of biodiversity loss and climate change).

Once paradigmatic inertia has led to existential risks, it has to be considered a form of collective delusion.

“Climate change is not a war, it is genocide. It is domination. It is extinction. It is the most recent manifestation of how powerful men throughout history have sought to steal from the less powerful and dismiss them as merely inconvenient.”
– Eric Holthaus, autistic meteorologist and climate journalist, from Climate change is about how we treat each other

In the history of “civilisations” to date, paradigmatic inertia is broken by one of more of the following events:

Plagues and famines represent forces that are at least to some extent beyond human control, with the potential to act as powerful catalysts for wars and revolutions.

As war is increasingly waged via economic and psychological means, wars are less and less capable of inducing paradigmatic changes. At the level of nation states “civilised” war is focused on presenting other cultures as “threats”, and internally on widening the inequalities between the elites and the rest of the population. The latter is achieved by pretending that established institutions are capable of addressing the environmental challenges at hand.

Revolutions can be understood as phase shifts that occur when the level of cognitive dissonance that a population experiences between daily life and the fictions that are perpetuated by rulers and elites can no longer be maintained. In a revolution a large part of the population openly dismisses established institutions as dysfunctional and establishes new institutions based on ideas that often have been “fermenting” within the population for decades.

The duration of the transition to a new regime of governance, the extent to which institutions are completely replaced or simply restaffed, and the level of violence involved in the transition vary greatly depending on the context at hand. Only some revolutions constitute a genuine shift in the paradigm of governance. The typical result tends to be a new set of institutions, a revised composition of the elites, and a new set of rules for maintaining a primate dominance hierarchy.

The social burden of famines is always carried by the wider population, and much less by the established elites, but famines can act as effective catalysts for revolutions and wars.

Plagues (pandemics) are interesting in that they represent a threat to entire societies, with little discrimination between elites and the rest of the population. Since history is typically written by historians commissioned by or at least tolerated by the ruling (victorious) elites, most history books focus on wars and revolutions, and present plagues as disruptions or setbacks on the path of human progress towards more “advanced” forms of “civilisation”. A critical review of written historical records allows for a reduction in anthropocentric bias and a different interpretation that acknowledges the role of pandemics in acting as triggers for genuine paradigmatic shifts in human societies.

Pandemics and pandemic risks prompted the development of better sanitation, antibiotics and vaccines for many human pathogens, leading to large improvements in the quality of healthcare services and human health over the last two centuries, such that in most societies, and in particular in the so called “developed” countries, pandemics with mortality in the 0.3 to 1% range or above were no longer part of living memory until 2020.

COVID-19 punched a big hole into the progress myth of of our “civilisation” and has exposed cultural practices that have substantially increased the risks of pandemics over the last 50 years.

In a globalised world, the necessary responses to contain the impact of COVID-19 triggered rapid cultural evolution in virtually all societies, and have prompted governments and local populations to reflect on the longer-term implications of the SARS CoV2 pandemic.

At this stage our societies are still in the early stages of (re)learning essential knowledge about pandemics. The growing risks of much deadlier pandemics emanating from industrial animal agriculture practices, natural ecosystem destruction, and accelerating climate change (also leading to increasingly extreme weather events, crop failures, and resource conflicts) are not yet part of the public discourse.

The collective delusion of maintaining cultural inertia will be resolved one way or another within the next 20 years. Pandemics are typically deadlier than wars, and they can’t be stopped or prevented by wars. Famines and revolutions are common downstream effects of pandemics and wars.

To what extent human societies will experience famines, wars, and violent revolutions in the coming decades depends on two factors:

I think it unlikely we get out of this, at this point, without abandoning swaths of cities and nations in a band around the equator (too hot & humid for humans), and many coastal cities and regions (uneconomic to wall them). I hope I’m wrong. Let’s fight hard to save what we can.

This is a conclusion I draw from my personal synthesis of all that I’m taking in: model projections, paleoclimate, politics, sociology, and psychology, for whatever that is worth. There’s a ton I don’t know, there’s a ton I can’t know, but there’s also a ton I do know.

Depending on what paths human societies choose to take, the above scenarios will play out over 20, 50, 100, or 200 years. Our actions now will determine the level of pain of our children and future generations.

In this timely interview with Daniel Christian Wahl, Dennis Meadows (one of the authors of The Limits to Growth report (1972) observes that the myth of endless growth in industrialised societies tells us “to love to get what we want” and that on a finite planet we need to learn “to love to want what we get”.

In 2014, the University of Melbourne confirmed that the predictions from Limits to Growth were largely correct and that we are very close to tracking the “business-as-usual” scenario.

Dennis Meadows is worthwhile listening to. His insights reflect 50 years of failed attempts to communicate the impossibility of endless growth, but I also believe that he ignores the potential for positive cultural change that could be activated by depathologising neurodiversity and by recognising autistic people in particular as the agents of a healthy cultural immune system within human societies.

I want to end on a positive note, pointing to two longer articles on human potential:

These articles are also intended to provide a backdrop for presenting the history of the concept of neurodivergence as part of the Neurodiversity Documentary project.

Update: a few hours after writing the article, this timely call for climate action in New Zealand landed in my news feed.