Having opin­ions should not be a priv­i­lege, and yet for so many it is.

In my world, every­thing is just a little more intense than yours. Lights are so bright. Noises are so loud. Smells are so, well, smelly. The term “sen­sory over­load” gets thrown around a lot with autism, but you haven’t expe­ri­enced sen­sory over­load until you’ve been to an NHL game.

Despite the inten­sity, the expe­ri­ence is on my top ten list.

Before my ability to com­mu­ni­cate with a key­board, no one would believe a kid who wears noise blocking head­phones around the clock would love the mayhem of a packed arena. I might never have expe­ri­enced the magic of ice hockey.

Being able to tell people what I truly think has changed my life (though my dad now has to deal with me clap­ping back when he dishes out snark), and I can’t imagine going back to a time when I only had my nat­ural speech doing a poor job of telling my thoughts.

For so many other autistic kids, having access to real com­mu­ni­ca­tion is com­pletely out of their reach. Having opin­ions should not be a priv­i­lege and yet for so many it is.

About the time I fig­ured out that I could spell com­plex ideas, I also really made the con­nec­tion that I am not unique in this ability. I look around my school and cry on the inside because I know every kid there is smart. Why shouldn’t they have the same com­mu­ni­ca­tion teaching I had?

Until the schools alter their view of autism to make the leap from needing to be fixed to just needing to be taught how to com­mu­ni­cate, opin­ions will remain the priv­i­lege of us few lucky non­speaking autis­tics who can type.

Bearing that priv­i­lege in mind, here is my opinion. Stop drilling kids on use­less, repet­i­tive “mands” and teach them to spell. 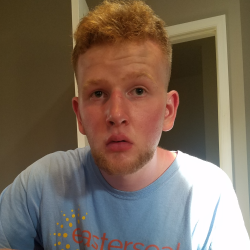 Trevor found his voice on the letterboard about three years ago and has no plans to shut up. Like Trevor's writing? Leave him a tip!

Latest posts by TrevorTypes (see all)

2020-01-23
Previous Post: “You can be whatever you want!” On dealing with high-expectation anxiety
Next Post: Seclusion Broke My Heart