Every year, I vow to lose weight, and I don’t do it. Or to find love, which I now have. Or to do more self-care, which is a noble goal, and I am improving. But what of this year?? This res­o­lu­tion has to last a decade, so it must be big and bold and worthy of ten years of hard work.

It must be a short­coming worthy of this type of ded­i­ca­tion.

Only one word big enough came to mind as a 40 year old woman: authen­ticity. But how does one embrace true authen­ticity? Especially in a cul­ture that truly despises it? That cul­ture is some­what respon­sible for authen­tic­i­ty’s extinc­tion.

I have been exam­ining the chal­lenge over the last few days, and these are my thoughts. Authenticity begins with attempts to unmask and be autistic where pos­sible, but this is only the bare begin­ning.

True authen­ticity isn’t just being your autistic self, your lib­eral self, or your constructed-identity self: it is being your whole self– beyond the labels or the descrip­tors. It is being who you truly are and sharing what you truly think and and feel. It is doing so at the risk of being unpop­ular, even with the people who claim to truly love you.

The sad truth is that despite the con­nec­tions allowed by social media, we are less our­selves than ever. It does not sur­prise me that the new mil­lennia birthed The Rise of ABA. Getting us all to behave and look the same through rein­force­ment is the tor­turous reflec­tion of society today.

There, I said it.

Today’s social media cul­ture divides us into groups: con­ser­v­a­tive, lib­eral, autism moms, autistic people, LGBTQ+ people and allies, reli­gious folk often against LGBTQ values, etc. The groups create a sense of belonging and iden­tity, but they also keep a close eye on us. We must con­form to our groups– OR ELSE.

What is this elu­sive “or else”? We could be unfriended or blocked or reported on social media. We could have our offending posts shared around Facebook to groups fully intent on destroying us. Or, in some ways the most sin­ister– we could be slan­dered and aban­doned by those who claimed to love and sup­port us.

Joseph McCarthy was a con­ser­v­a­tive politi­cian who tar­geted Communists for polit­ical, finan­cial, and social ruin. What made him espe­cially dan­gerous, how­ever, was that he also tar­geted both polit­ical ene­mies and those against his bul­lying in gen­eral as being Communists– effec­tively ruining them.

Social media has spawned a ready McCarthyism across the left AND the right, the con­ser­v­a­tive AND the lib­eral. The activist AND the anti-activist. I and some of the people I love most have been vic­tims of it. And it hurts, espe­cially as someone who spent my entire child­hood being rou­tinely excluded. It is tempting to be inau­thentic and fit in. But this is not what what I want for myself or those I love.

Sometimes I learn some­thing and choose inter­nally to make a change. Not through bul­lying or spam­ming or exclu­sion, but by gently being lead to examine my blindspots and biases. I am not talking about this. That is how we grow. Authenticity doesn’t mean rigidity. Hearts are moved and that is how we evolve– if we are lucky.

I am talking about being dropped or reported by people claiming to be friends because we dis­agree once. I am talking about the sheer number of people on land and online, who have tried to destroy me for not con­forming exactly to their ideas or party line. Before, my habit was to slink away, con­form, or dis­ap­pear.

I vow to try my hardest to be myself.

To say no when I mean no. To be honest even when unpop­ular. To worry more about who I am than about what you think.

I vow to find the strength to speak my truth even if my page has .5 out of 5 stars or saying no costs me my job. I vow to sup­port others, whom I care for, who do the same even if the social media machine destroys them.

I vow to share memes that I truly con­nect with, not just the socially approved memes of my groups and net­works. I vow to speak up when the ends don’t jus­tify the means. I choose to be afflicted rather than com­fort­able.

When asked to break a child both on and off the clock at my job or in my life, I will refuse and explain why as gently as I can. I will offer alter­na­tives. I will walk away if I must. I will only sup­port causes I truly believe in– not those that have become pop­ular with my kind.

I will be a Zorro and not an Avenger when my con­science calls me to be.

If I am forced to walk alone, I will do it with my head held high.

I, like each of you, was born to be no one but me. It is the one thing I truly do better than anyone else.

So here’s to a new era, one of authen­ticity over pop­u­larity, of holding others account­able through words and laws, of telling the truth and taking the con­se­quences.

And yes, of doing self care when this all becomes too painful. I will be a Revolutionary in the Era of the Social US. I will strive to be only me.

May peace, pros­perity, love, and joy find each of you in the new year and decade to come! 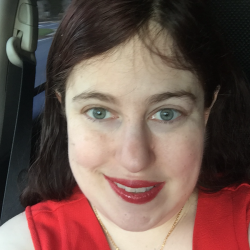 AspieGurl
Otherwise known as Wendy, AspieGurl is a 39 year old blogger living in Northern Virginia with her wonderful mom and NT boyfriend Shawn.She got her MSW from George Mason University and has worked in both direct service and non-profit development and communication.Her passions include her family, singing in her UU church choir, activism, and well written sci fi.

Latest posts by AspieGurl (see all)