[If you missed the first part of this article, follow this link and check it out! Because we’re picking up right where we left off, folks, despite my extended Easter hiatus.]

The Fight To Become Official

In the first part of this article, I made a number of argu­ments for self-diagnosis. It’d be a lie to say there aren’t more coming in this second half. That is kind of the oper­a­tive thesis here, but I think I hit the high­lights.

That said, this may still feel lop­sided, because when it comes to an offi­cial diagnosis…there are a lot of obsta­cles to actu­ally acquiring one. There is a reason, after all, I am self-diagnosed, and why I wrote an entire article in sup­port of self-diagnosis.

First of all, let’s talk cost.  I am, as are many other people on the spec­trum, under-employed at best, not making a whole lot of money for var­ious rea­sons.  It can be hard for us to find jobs we can easily do, bosses who can accept and work with our neu­ro­di­ver­gence, and sched­ules that can accom­mo­date us.

Some of us find it dif­fi­cult, if not impos­sible, to seek or achieve quote-unquote ‘normal’ employ­ment at all, depending on the ways our neu­ro­di­ver­gence affects us. As a direct result, a lot of us are, shall we say…financially dis­ad­van­taged.

This seems out­ra­geously unfair, con­sid­ering how des­per­ately hard we have to work just to manage as well as we can in a society not struc­tured for people who operate the way we do. A single day of unre­mark­able cus­tomer ser­vice (or even friendly social­izing in a casual envi­ron­ment) can rattle my nerves so badly that I can’t focus on much of any­thing for 48 hours after­wards, whereas a neu­rotyp­ical person may find their bat­tery hardly drained in the same sit­u­a­tion.

(In case you’re won­dering why I didn’t use func­tioning labels in that last para­graph, we’ve got a great article detailing the prob­lems with that.)

Add into these con­sid­er­a­tions the state of health­care, the fact that not all coun­tries have easy access to health insur­ance, and the costs of cer­tain tests, screening instru­ments, and spe­cial­ized behav­ior­ists needed to eval­uate and diag­nose someone clin­i­cally, and the price tag for even an intake exam can easily be out of reach for your average neu­ro­di­ver­gent person.

When I was doing Google searches on the sub­ject for myself, most people advo­cated for simply looking at check­lists or taking free diag­nostic tests rather than seeking a clin­ical assess­ment.

It becomes even more lim­ited when it comes to people who spe­cialize in adult autism and Asperger’s, as neu­ro­di­ver­gence tends to be rec­og­nized and diag­nosed more readily in chil­dren. (And usu­ally, it’s adults who have picked up on their own symp­toms that find them­selves needing to either accept self-diagnosis or seek a clin­ical one, so it’s pri­marily adults I’m addressing this article to.)

The dif­fi­cul­ties of get­ting an offi­cial diag­nosis are starting to stack up a bit here, aren’t they?

Well, sadly, it gets worse.  Even if you can afford a pro­fes­sional, and even if you can find one in your area, there’s no guar­antee that they’ll diag­nose you as being on the spec­trum– even if you actu­ally are.

Diagnosticians are, at the end of the day, people, and diag­nosing neu­ro­di­ver­gence on the spec­trum isn’t really some­thing you can do a swab test for (yet).  A lot of it comes down to gauging the kind of symp­toms you have, how many of them you have, the degree of severity to which you expe­ri­ence them– which is to say, sub­jec­tive cri­teria.

What’s more is that you-- the person with the most inti­mate knowl­edge of your expe­ri­ences, but also someone whose com­mu­ni­ca­tion skills aren’t nec­es­sarily infal­lible– have to com­mu­ni­cate those things to your doctor, and it’s pos­sible that you may not express them well, that you may empha­size the wrong things, that your doctor may focus on the wrong things, or even simply that your doctor may not listen to you.

The value of a pro­fes­sional diag­nosis should be the tan­gible ben­e­fits that come from offi­cial med­ical con­fir­ma­tion. It should not be what we con­sider the base­line of true validity in terms of some­one’s being on the spec­trum or not. We’re not punching tickets here, so there’s no casual reason anyone should need to see an offi­cial stamp.

If You Like The Main Course, You’ll Love the Sides!

Last but not least, some of the biggest obsta­cles to obtaining a pro­fes­sional diag­nosis can be the ones imposed on us by our own bodies. I noted in the first part of this article that ADHD has a lot of overlap with autism, but I didn’t go into the fact that both are co-morbid with a number of other things– most com­monly anx­iety, depres­sion, sen­sory pro­cessing issues, and gas­tric dis­or­ders.

The strain and stress of dealing with mul­tiple levels of neu­ro­log­ical issues, sev­eral of which drain our energy and drive, can make it hard to go through the trying process of searching for pro­fes­sionals, nav­i­gating phone calls and sec­re­taries and web­sites, making and keeping appoint­ments…

In short, on top of the prac­tical issues that make get­ting a diag­nosis dif­fi­cult, we have per­sonal issues that can make even seeking one in the first place an uphill battle.

Why Would I Ever Want An Official Diagnosis, Then???

“Wow, Callie,” says the con­ve­nient voice in my head I invent when­ever I need someone to ask me leading ques­tions, “there’s so much work to get­ting an offi­cial diag­nosis! It sounds so hard to do! Are you saying it’s a bad idea to get one?”

“Oh. Well…what are you saying, then?”

Being clin­i­cally rec­og­nized as autistic can give you access to valu­able resources that require an offi­cial diag­nosis.  It also, as pre­vi­ously men­tioned, helps silence the Doubting Thomas that lives within your own head, which those of us who have mental ill­nesses on top of being autistic are intimately-acquainted. It’s the little voice who whis­pers you’re just faking every­thing. But that should be an inci­dental ben­efit of receiving a clin­ical diag­nosis, not the main goal.

Distressingly, not all voices of doubt come from inside one’s own head. It’s unfor­tu­nately common for neu­rotyp­ical friends and family, or even rel­a­tive strangers, to insist someone can’t be autistic.

Usually, such denial is the result of those people having a very narrow, or skewed, view of what an autistic person looks or acts like. Such people are likely to push you to ‘prove’ you’re autistic with an offi­cial diag­nosis, and/or refuse to take even the most painstak­ingly researched self-diagnosis seri­ously.

There’s a fine line between someone encour­aging you to get a pro­fes­sional diag­nosis because they believe it would be gen­uinely helpful to you, and their refusing to believe you about your own expe­ri­ences and research unless a cred­ible third party backs you up.

It’s a line a lot of neu­rotyp­i­cals fla­grantly cross. Self-diagnosis is still an expert opinion that deserves to be respected by the people who know you, your­self included.

When it comes to people who won’t believe or accept that you may be neu­ro­di­ver­gent, for what­ever reason, the problem usu­ally goes deeper than whether you’ve got a doc­tor’s note or not.

As such, proving any­thing to others, or feeling like you’ll be safe from crit­i­cism if you meet the right cri­teria to sat­isfy base­less accu­sa­tions, is rarely a good basis for any deci­sion– much less a deci­sion as impor­tant as seeking a (very expen­sive) clin­ical diag­nosis for autism. Besides, the impor­tance of learning to have faith in your­self and your own self-knowledge can’t be over­stated; out­side con­fir­ma­tion is always wel­come, but try not to let it become a require­ment for per­sonal trust.

…it’s impos­sible to over-state how pow­erful the appeal of those things is, even in the face of accepting some­thing seem­ingly less-than-ideal about our­selves.

So, are those the things you want your offi­cial diag­nosis to make real for you? Because it’s impor­tant for you to realize that those are all things you can give your­self with self-diagnosis.

You don’t need to wait.  You don’t need a doc­tor’s note.  You don’t need to be a card-carrying aspie (please see the link for how we’re reclaiming that word) or autistic person to join the secret cabal.  (And if anyone asks you, the pass­word is giraffe.) No one is checking your cre­den­tials when you iden­tify your­self as autistic in everyday life!

There are very spe­cific cir­cum­stances for which you need an offi­cial diag­nosis, and you’ll know exactly what they are if and when you need them.

For every­thing else, there’s Mastercard. (Okay, I kid, but you were warned I’m a memelord so if you’ve gotten this far in the article and didn’t expect this you have no one else to blame.)

But in all seri­ous­ness, for every­thing else, you have so much freedom, and you shouldn’t spend it ago­nizing over whether or not you’re allowed to take a label that will improve your life in sig­nif­i­cant ways.  That should be a no-brainer.

If you need an offi­cial diag­nosis for spe­cific rea­sons, get one.  If you don’t, then allow your­self to self-diagnose. Because…

Labels Are Meant To HELP You

You are the expert on your­self.  If you’re sat­is­fied with your own store of evi­dence as to your neu­rotype, if you’re con­vinced of and are craving the ben­e­fits of a diag­nosis, then you owe it to your­self to kick your self-doubt to the curb and take that label.  That doubt is only harming you, holding you to an illu­sory burden of proof that no one is asking you for.

Finally, dear reader, I offer you one last resource. It’s only as good as you believe it to be, but then again, that goes for most things.

Opening the door, step­ping over the threshold– if those are things you want to do, then you have the power to do them. If you want to see whether the people past these doors are your people, if you want to be able to com­pare your own expe­ri­ences against those of actu­ally autistic people, to be able to self-diagnose with con­fi­dence, then the only way is to come in and see for your­self.

I’m not here to tell you what you should do. I’m just standing here by this door I’ve made, hoping it will help grant access to the people who want it, and to say one thing to those who come in– whether they’re just vis­iting, whether they’re coming home for the first time, or whether they’re still trying to figure that out them­selves. 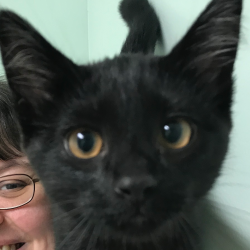 Callie (real name undisclosed due to terminal awkwardness) is a 35-year-old self-diagnosed autistic person with no particular credentials outside her own experiences. There is no actual evidence of her being three feral raccoons lashed together in a trenchcoat, but they've never been seen in the same room together, either. Consider buying her, or the raccoons, a Ko-fi.