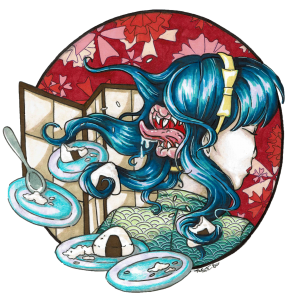 Self-Care: A Timeless Lesson of Need, Deprivation, and Consequence

Let me introduce you to a figure from the folklore of Japan called the Futakuchi-onna. Her name means “two-mouthed woman,” and she comes from a country facing a crisis of self-care. In fact, at the end of last year, the youth suicide rate in Japan had reached its highest in thirty years. The stress of a work-centric culture along with a strong stigma against reaching out for mental health care are thought to be major factors for the suicide rates in Japan, and are things many of us can relate to on some level. Perhaps then, it is somehow appropriate that we can learn about the dangers and effects of neglecting ourselves through the story of the Futakuchi-onna.