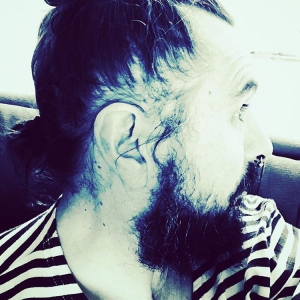 Given the choice between using the Welsh language (Cymraeg) or English, I would invariably choose Cymraeg. Not just because I am Welsh and therefore biased, but because though at first glance Cymraeg looks forbidding, the letters and therefore the words can only be pronounced one way making it much easier.

I feel sorry for learners trying to wrap their heads round the many grammar rules and laws you need to master to gain even a beginners grasp of English.

This also applies to my interactions with the non-autistic world and its infuriating, cryptic meanings. How much easier life would be if it was only pronounced one way, if it gracefully glided along, describing its meaning through a simple if/then code…

Instead, much like the English word ‘hough’ can have many different pronunciations and meanings (huff, hock, how, etc) non-autistic language and actions are often bewildering and contradictory– dazzle of hints and secret signals which leave me thinking that much of their language must be in a pitch which I am unable to hear.

This phenomenon of struggling to decode some implied meanings in non autistic behaviour and language is often referred to as an impaired theory of mind (ToM) and seems to be one of the first traits people think of when they think of autistic people. Many autistic campaigners opine that autistic people do not have an impaired ToM, but rather we have an autistic ToM, and that the non-autistics cannot understand us, either.

This is what autistic researcher, Dr. Damian Milton, calls The Double Empathy Problem.

That was thrown into sharp relief for me recently.

I applied for a job at a small, shabby museum around the back of Manchester City Centre that tells the story of the labour struggle in the UK. The job was helping to curate a project describing the fight for disabled people’s rights.

I had already contributed to a film the project was creating, so the project manager emailed me out of the blue inviting me to apply for the job. About two months after applying, the manager contacted all the applicants and told us they had changed the application process.

We now needed to submit a video of ourselves explaining why we wanted the job. I had a couple of goes at creating an impressive video, but in the end decided not to proceed and to drop out of contention.

However, 5 minutes after the deadline passed, I was emailed by the manager out of the blue again, enthusiastically encouraging me to stay in the process. He offered to extend the deadline for me or even to forego the video submission altogether, seemingly desperate for me to stay and continue.

I felt excited. If he was that desperate for me to stay in the process, I must be a strong candidate; and as the project was a very interesting one, I agreed to continue applying. However, after a month-long wait of growing anticipation, I got a brief generic email telling me I had not even been shortlisted for interview.

This left me very angry. The world seemed to spin in front of me. It wasn’t just that I did not get the job, but I also felt that my “impaired theory of mind” had been thrown in my face. Again. Throughout my working life, this has caused me to make expensive errors and to face constant humiliation.

But like most accommodations for autistic people, how simple a thing it would be just to give instruction in a straightforward, unambiguous fashion? There is nobody who would be put at a disadvantage from this adjustment.

What difference is there in ensuring that a sign or written directions are able to be read by people with vision challenges or that your information is in an appropriate format for the Deaf? There is none, and yet this is an adjustment that autistic people seem to be as far away from achieving today as ever.

I despise being seen as a victim, but the orchestra of the non-autistic world still routinely seems to play notes which I cannot physically hear.

Even worse, they blame me for not hearing them. When I complained about the ambiguity of the signals I had been sent, one of the museum’s managers sneered that it was my fault!

I have given up trying to get them to understand, as they appear unable to hear me over their non-autistic privilege; but if I had one wish to change things for our community, it would be for managers and those in power to be sent on a course on the use of Plain English.