I have always been dif­ferent, although I did not under­stand why until I was diag­nosed last year as being autistic right around the time my son started his autism assess­ment.

Among other aspects of being autistic, one that has always affected me strongly is anx­iety.

Anxiety is like having a voice in your head whis­pering all the things that can go wrong in any sit­u­a­tion and not having the means to shut it out.  For some of us, anx­iety is part of daily life, a con­stant battle to over­come the anx­iety to some­times do the sim­plest of things.

People often believe that anx­iety is sit­u­a­tional or only hap­pens during stressful periods.  This isn’t entirely the case. Like a lot of autis­tics, I over­think every­thing and replay con­ver­sa­tions and events in my head on a con­stant loop.

All the while, my anx­iety demon is chastising my choices, actions, or social inter­ac­tions, making my anx­iety peak, con­vincing me that I have made a fool of myself, that I’ve been mis­un­der­stood, or that I’ve made a mis­take, and making me dread being in these sit­u­a­tions again in case I repeat his­tory.

When we’re faced with new sit­u­a­tions or social events, our anx­iety demons’ voices grows louder, demanding our full atten­tion, over­whelming all other thoughts that we are trying to process.

“What if it’s too loud, and there are too many people?”

“What if I get over­whelmed?”

“When will I be able to leave?”

“What if I say some­thing stupid?”

“What will I be expected to do or act like?”

“What’s going to happen, and when?”

“Will people dis­like or laugh at me, thinking that I’m weird?”

These are just some of the things that my anx­iety demon says to me when I con­sider social­ising or going some­where new.

As an adult, I am able to manage my anx­iety to an extent; I have worked out what sit­u­a­tions I need to avoid, what I can do to pre­pare for new sit­u­a­tions, and how to self-regulate.

A huge anx­iety trigger for most autistic chil­dren is going to school.

So many aspects are out of their con­trol, as well as having both edu­ca­tional and social demands put on them con­tin­u­ously, which can trigger their demand avoid­ance in a sit­u­a­tion where they cannot easily avoid these demands.

Imagine for a moment that you are facing all of these things, and your anx­iety demon is con­stantly whis­pering that it will all go wrong, that you won’t cope, that no one will like you, or that you’ll fail.

When I was at school, diag­noses weren’t com­mon­place, and the schools weren’t as quick as they are nowa­days to recog­nise the strug­gles that autis­tics expe­ri­ence, so I had to try to manage my anx­iety myself.

This took the form of leaving classes as soon as they fin­ished so that I could spend some time on my own in a quiet bath­room before rushing off to the next class, as well as spending break times and lunchtimes alone and away from everyone else on the play­ground.

When I got home, I would spend all of my time alone in my bed­room, immersed in video games that I could escape into, blocking out reality and all other stimuli for a while.  This would qui­eten the anx­iety demon, as I was focused so heavily on the game that I couldn’t hear it as much.

Without doing this, I would often spiral into melt­down or lash out at family mem­bers because I had unknow­ingly been masking all day (hiding my anx­iety and dif­fer­ences from my peers), so when I returned to the safety of my house, all of the anx­iety and over­whelm from the day would explode out of me.

Nowadays there are many dif­ferent tac­tics, equip­ment, and toys that can help autistic chil­dren manage and cope with their anx­iety, as well as dif­ferent methods for them to signal to others that their anx­iety is high and that they’re not coping.  I would have found these invalu­able when I was young.

Tools include chewy neck­laces that can be worn by kids and chewed on when they feel anx­ious, fiddle toys that can be kept in pockets and used when needed, equip­ment that can put on the chair, like a wobble seat or the bands that go around the chair legs so that the child can bounce their legs off it, stim­ming and moving whilst still sit­ting at their desk and not drawing the atten­tion of their class­mates.

Schools are begin­ning to be better at recog­nising a child in over­whelm and dis­tress and, in some schools, can issue passes to chil­dren to use when they need to leave the class­room and have some quiet time.

Educational Health Care Plans that legally have to be fol­lowed to the T are now more preva­lent and are highly ben­e­fi­cial to our chil­dren who have addi­tional edu­ca­tional, behav­ioural, or sen­sory needs, though funding in schools often leads to the money (that the school receives for each child with an EHCP) being used for school equip­ment or sup­plies that aren’t directly used by the child the money is assigned for.  Because this money is spent else­where, it means that the child in ques­tion may not be get­ting all of their needs met, as there isn’t enough money left.

An impor­tant fact to remember is that an anx­ious or over­whelmed child is inca­pable of learning effec­tively.  They are not able to process all of the infor­ma­tion they are being given.  Therefore, it is imper­a­tive that mea­sures are taken in order to help them reg­u­late their anx­iety and over­whelm while at school.

The world is changing slowly to make things easier for us, but until it reaches the point where every autistic child has access to sup­port and help where needed, we, their par­ents, have to truly know, under­stand, and sup­port our chil­dren, espe­cially with their anx­iety, as it over­rules every­thing.

We have to be the ones to com­mu­ni­cate with the SEN workers (spe­cial edu­ca­tion edu­ca­tors and assis­tants, for Americans) and the schools when our chil­dren are strug­gling, and we need to be able to explain to them what the issue is and how they can help to sup­port our chil­dren, as chil­dren will most com­monly mask at school, so that SEN workers or teachers won’t realise that they’re not coping.

My son’s anx­iety was at the point where he had become ago­ra­phobic and couldn’t cope with even the most minor stimuli. We con­sulted with the autistic com­mu­nity and found a com­bi­na­tion of sup­ple­ments and a sen­sory diet that worked won­ders to help him with taming his anx­iety demon.

We don’t have to make the folly of having to learn from our own mis­takes.  Maybe that was the plight of the autistic before the internet.  Now, we can learn from the col­lec­tive infor­ma­tion put out by the autistic com­mu­nity, others who have walked this path before us, and can learn what has worked and what hasn’t from them. 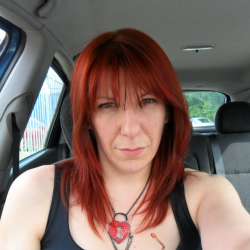 I am a PDA autistic with ADHD, an autistic husband and an autistic son.
I am a passionate autistic advocate and my aim is to help to spread awareness, understanding and acceptance of autistics.
I live in the UK and, other than writing, enjoy several different craft hobbies (when I have time and my PDA lets me indulge!) and talking our son and our dog to the woods for a meander!

2019-07-10
Previous Post: Poetry: Away and Apart
Next Post: FC, RPM, and How Wikipedia Became Complicit in Silencing Non-speaking Autistics