I Don’t Regret You2 min read

“I was won­dering … if I have kids, will they be autistic?”

“Well, both your dad and I are Neurodivergent … and being autistic is a part of that for our family.  So, yes. It is highly likely that if you have chil­dren, they will be autistic.”

“I don’t think I will have kids.  My life is really hard, and I don’t want to bring people into this world if their life is going to be this hard.”

“I think that is a very deep thought, Honey.  Your life has been really hard and lonely. Can I speak to that, though?”

“I don’t regret you.  I really like who you are.  You are my first, and I had no idea what I was doing.  So, you didn’t get the sup­port you needed when you were your brother’s age.  I didn’t know you, nor I for that matter, were Neurodivergent. It wasn’t until you started kinder­garten that I noticed you were not fit­ting into the estab­lished struc­ture.

“Looking back, it makes sense that I would have missed that you were dif­ferent because I am the same kind of dif­ferent. I worked really hard to not squash who and how you are when you were little for rea­sons that were not con­nected to my cur­rent “pro-neurodiversity” stance.  I think I expe­ri­enced life as a child in a set­ting where I was just trying to sur­vive emo­tion­ally and men­tally around con­stant verbal and emo­tional shrapnel.

“For the majority of my adult life, I attrib­uted my chal­lenges exclu­sively to that.  I could have grown into a very abu­sive person, but I wonder if my neu­ro­log­ical dif­fer­ences didn’t pre­serve my heart somehow.  Sure, I’m rid­dled with anx­iety and my brain feels like a junk drawer, but I’m a good Mom.

“I am a kind and honest person. I am cre­ative.  I have some­thing unique to put into this world. And, my dear daughter, I do believe my ceiling is your floor. I see a bril­liance in you that your strug­gles have helped to forge.  Life is really hard, but we do hard things every day.

“You don’t have to feel like you must have chil­dren.  Your life’s pur­pose might be served better if you don’t.  However, I want to encourage you to know that you bringing more people into this world that are like you, isn’t some­thing you need to be afraid of.  It isn’t a regretful thing to do. I wanted you for years before I got to hold you.” 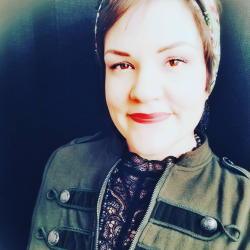